Whistler, Canada –(21 April 2014) – New Zealand’s freeskiing brothers Jossi and Beau-James Wells have ended their northern hemisphere season on a high after competing at the World Skiing Invitational, which doubles as the Association of Freeskiing Professionals (AFP) World Championships, in Whistler, Canada over the Easter weekend. Jossi placed third in the Samsung Slopestyle while Beau’s results saw him finish the season in second place on the AFP overall rankings.

Slopestyle qualifying rounds took place on Saturday with the top three men from each of two heats plus the next four top scorers joining 20 pre-qualified athletes (based on AFP rankings) in Sunday’s elimination rounds. Jossi finished second and Beau fourth in heat one, both making it through to the next stage.

While a thick layer of fog made for extra challenging conditions for Sunday’s elimination rounds, competitors were prepared to prove why they are the best in the world and throw down for their final competition of the northern hemisphere season.

However, any decision to save the best until last in the anticipated final rounds would later be regretted, with poor visibility meaning that athletes were only able to complete their elimination runs. While not pulling out the biggest guns, Jossi Wells scored 81.33 with his second run, enough to claim third place and finish the season on the podium.

Beau-James opted for the bigger tricks but couldn’t get his feet underneath him for clean landings and finished the Slopestyle event in 19th place.

The Big Air event had taken place under floodlights the previous evening with an impressive roster of 22 athletes tackling the massive 65 foot jump to battle it out for the AFP Big Air Championship title.

Sweden’s Jesper Tjader was on fire all night stomping every trick in his book. In the end it was his second run hit with a right double 1620 mute grab for a score of 90.00 that earned him first place. Bobby Brown was close on his tail, taking second place with his first run hit with a switch double misty 1260 mute for a score of 89.00. In third place was last year’s Big Air champion Vincent Gagnier who threw a stylish bio 1260 octo to tail grab on his second hit, landing him a score of 87.60.

With Jossi Wells opting to save himself for the Slopestyle, Beau-James was the only Kiwi competitor in the Big Air, putting together a solid performance for a 19th place finish.

With the last competition of the AFP World Tour in the bag the final world rankings could be calculated. The overall ranking is determined by taking the top scores from four Halfpipe, four Slopestyle and two Big Air events within the 52 week ranking window. Beau-James Wells would finish the tour in second place overall.

For further information on AFP rankings and events click here 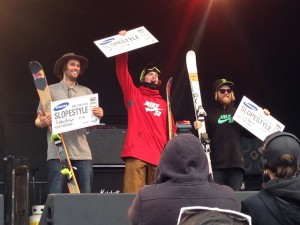