Dogged by a heel injury in the critical countdown to the games, the oldest of three Wells brothers in Olympic contention spent the bulk of the last eight weeks off the snow. Winning his first gold medal at a World Cup event just two weeks from the Olympic Games is crucial in his build-up to Sochi 2014.

While Team USA athletes did not attend the Gstaad FIS World Cup Winter Performance Programme Director Ashley Light said it was still a very competitive World Cup. “It wasn’t an Olympic field, but it was nonetheless a tough event. Most importantly, the result shows that Jossi is on track to recovery and has also done the job of earning our team a second quota spot.”

Wells won the competition with an 88.40 throwing a double-corked left side 1260 followed by back-to-back switch 1080s beating Swedish Jesper Tjader with 88.20 by a fraction.

"I came out here to get some World Cup points and earn New Zealand another quota spot for Sochi," said Wells, "and I did that yesterday by qualifying (for finals), so I came out here today and just wanted to ski my best and hopefully land myself a spot on the podium. So landed my run and ended up up top, and I'm really happy."

In Stoneham, Quebec, New Zealand’s women snowboard slopestyle team are midway through competition with finals underway tomorrow. With strong results by the New Zealanders, it is likely all four national quota spots will be retained ahead of Sochi 2014. 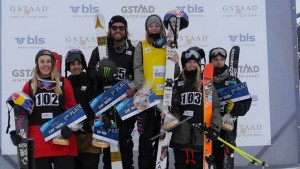