Lake Wanaka, New Zealand (23 May 2016) - It was a weekend of celebration for New Zealand’s Junior snow sports athletes. On Friday evening freeskier Beau-James Wells was named Junior Sportsman of the Year at the Otago Sports Awards. On Saturday alpine ski racer Piera Hudson was named Hawke's Bay Junior Sportsperson of the Year. The Wanaka Ski & Snowsports Club hosted over 200 people at their Winter to Winter evening on Sunday night to celebrate the outstanding achievements of NZ’s junior (U18) athletes during the northern hemisphere season.

Piera had one of the best seasons in her career to date, representing New Zealand at the FIS Junior World Ski Champs in Sochi, Russia and reaching the podium at several FIS races.

Beau-James defended his junior world championship title in freeski halfpipe at the International Ski Federation (FIS) Junior World Ski Championships in March and also won the silver medal in the slopestyle. He rounded out the year with a career-best result finishing second in men's superpipe at the Dew Tour in Breckenridge, USA.

Attendees of The Wanaka Ski & Snowsports Club Winter to Winter celebrations heard inspiring stories from high achieving young athletes across a range of snow sports disciplines. Finn Bilous and Tiarn Collins spoke of their experiences of the Youth Olympic Games where Finn won two medals. Craig Murray shared his experiences of the Junior World Freeride Tour, of which he was crowned 2016 champion, and ski racer Ben Richards recounted highlights from his highly successful season including podium results at the Whistler Cup and a top 10 result in the Trofeo Topolino, widely regarded as the world's most prestigious junior ski race.

Zoi Sadowki Synott and Alice Robinson wowed the audience with their achievements. Zoi chalked up a win in the USASA National Championships open women's snowboard slopestyle and has set herself a goal of winning an Olympic gold medal. Up and coming ski racer Alice Robinson  put together an outstanding performance at the USSA U16 Nationals, winning the Giant Slalom and placing second in the Super-G. She also achieved a top 10 result in the Trofeo Topolino.

Congratulations to everyone on your achievements! 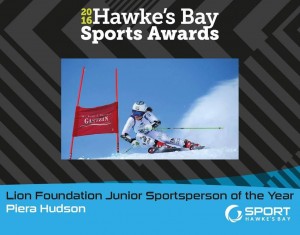