Les Arcs, France (23 January 2017) – The next generation of New Zealand freeride athletes is making its mark on the world stage, with a Kiwi landing on the podium at a Junior Freeride Tour competition for the second weekend in a row. Finn Duffy (Queenstown) placed second in men’s snowboard at the three-star competition held in the French resort of Les Arcs on Sunday.

Finn explains how the competition played out for him: “We got all the info on the venue the day before and it wasn’t what we expected, there were a lot of closed features so it really made me think about my run and get creative. I dropped in for my run and boosted straight into the powder and down to my first cliff. I went a bit bigger than expected and had a bit of a back slap on landing but kept riding to my next drop, stomped that one and rode out to the finish. The backslap probably cost me the win but I was stoked not to have crashed.”

The men’s ski division saw three New Zealanders on the start list with Hugo Cameron (Taupo) once again finishing in the top 10 - although not able to back up his second place finish from last weekend’s competition in Verbier, Switzerland - placing eighth. Alistair Garland (Wanaka) finished 11th and Matt Sweet (Hamilton) 32nd.

“The Les Arcs comp was a fun one,” says Hugo. “I tried to step up the level of my skiing because it was my first three-star competition over here and it worked out pretty well. I chose a line that was fairly challenging for me and managed to put ti to my feet, which was a big confidence builder for the next comp. I was aiming for a top 10 finish so I was happy with how the results turned out.”

AJ was not only “really stoked with how my run went” but “also super excited and humbled to have gained a wildcard to compete for New Zealand at the Freeride Junior World Championships which are being held in Grandvalira, Andorra” from 5-8 February.

Billed as “the most important event in junior freeride” the Junior World Champs will welcome over 60 youth riders aged 15-18, representing 15 nations, who have earned their invitation with strong overall rankings in Freeride Junior events. Finn Duffy and Matt Sweet have also received invitations to compete.

The NZ contingent will first compete in another three-star event at the French resort of Chamonix this coming weekend, 28-29 January.

Also in competition this weekend is Wanaka’s Sam Lee who, having made his way through the ranks of the qualifying tour will make his debut on the prestigious Freeride World Tour. The FWT is the worldwide circuit of freeride snowboarding and skiing with the best riders in the world competing on the most legendary and challenging alpine faces and the most renowned ski resorts across the world.

The five-stop tour also begins in Chamonix before moving to Vallnord-Arcalis, Andorra from 10-11 February and Fieberbrunn, Austria from 6-7 March. The top 12 male ski competitors will then qualify to compete in Haines, Alaska from 18-20 March before taking on the grand finale in Verbier, Switzerland on April 1st - 2nd.

More information on the Freeride World Tour and Freeride Junior Tour is available at http://www.freerideworldtour.com/ 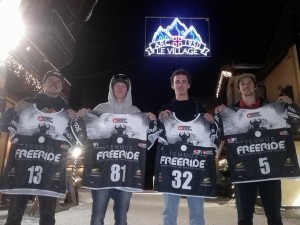