Three Kiwis in Action at The Freeride Junior World Championships

Grandvalira, Andorra (5 February 2017) – Three New Zealand athletes were amongst sixty of the best young riders from around the world who were invited to compete on the technical slopes of the Andorran ski resort of Grandvalira for the most prestigious event in junior freeride: The Freeride Junior World Championships. Alistair Garland (Wanaka) finished fifth and Matthew Sweet (Hamilton) 14th in the male ski category and Finn Duffy (Queenstown) 11th in men’s snowboard in Saturday’s (4 February) competition.

These emerging top-level athletes faced off on Saturday afternoon on the area’s renowned freeride terrain which is characterized by a highly-featured competition face on Pic Alt de Cubil (2700m).

Despite challenging conditions caused by intermittent snowfall and low visibility, the competitors exhibited a very high level of riding as demonstrated by impressive line selection and a progressive riding style.

“I couldn't be happier with my fifth place result here in Grandvalira,” says Alistair. “Conditions were tough with high wind and white out which pushed the start late into the day but I was pleased to put a solid run down for a score of 77.00 in my first four-star competition and proud to represent New Zealand on the world stage.”

Matt Sweet was “pretty happy” with his 14th place finish despite “a few control issues” and detouring away from his planned line mid-run. “Definitely a few things to work on going into the next comp,” he says.

The New Zealand contingent will remain in Andorra to compete at the Eldorado Freeride Junior three-star event scheduled to be held at Vallnord-Arcalís from 11-12 February. The first competition of the Freeride World Tour will also be held at the resort from 9-16 February with Wanaka skier Sam Lee set to make his debut on the Tour. 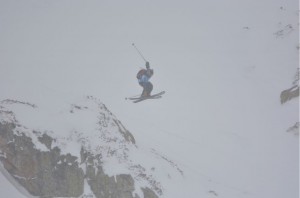