Slalom Medal for Piera Hudson in China; Porteous, Wells Through to Finals at Freeski Halfpipe World Cup in USA

New Zealand skiers are making their presence felt on the international stage with ski racer Piera Hudson claiming a bronze medal in Slalom at the Far East Cup series in Wanlong, China, and Nico Porteous, Miguel Porteous and Beau-James Wells,  qualifying first, second and third in their respective heats of the Freeski Halfpipe World Cup at Copper Mountain in the USA.

Hudson finished in fourth place in the FEC series opener on Tuesday 4 December, and stepped up to third the following day, finishing 0.75s behind Sweden’s Liv Ceder. She has made a strong start to her Northern Hemisphere season, last week becoming the first NZ athlete in 15 years to qualify for the second run of a World Cup Slalom and finish in the top 30 (26th place).

The race series continues at Wanlong Ski Resort with two Giant Slalom races over the next two days.

Meanwhile, freeskiers Beau-James Wells, Nico Porteous and Miguel Porteous have thrown down a strong challenge at the first FIS Halfpipe World Cup of the season against a full line up of the host US squad and the best of the rest of the world.

Wells finished third in heat one behind the USA’s Aaron Blunck and Alex Ferreira, while Nico Porteous topped heat two with brother Miguel a close second.

“It was pretty much a dream day today,” said Nico. “Practice was hard as it was slow but going into the first run I managed to do both way dub 12s and in the second run mellowed it back and focused on height.”

“Today went really great,” said Miguel. “I was stoked with my first run but obviously realised I needed to up it to get in to finals so increased one of my switch fives and made it  a switch dub which ended up paying off.”

“This is the first contest of the season, so I went in to qualifiers wanting to land two clean runs and get enough points to go through to finals,” explained Beau-James. “I’m definitely going to step it up for finals to solidify some decent points.” 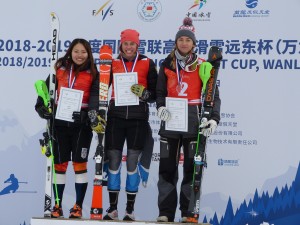