“It’s been a fantastic four days of racing,” said Willis who claimed the national titles in Giant Slalom and Slalom earlier in the week and made a significant improvement in his Giant Slalom world ranking moving from 190 to 105.

The women were the first to tackle today’s slalom course which was set on the Outwide run. 12 racers fell foul of the technical set and failed to finish but the New Zealand women held strong, with 10 Kiwis successfully making it down the course and qualifying for a second run start.

Piera Hudson carried the form which had seen her successfully defend her titles in the Slalom and Giant Slalom at the start of the week, putting together a good run to hold second place for the first run.

Run two for the women got underway after a course reset. Piera started out strong but killed her speed coming off the pitch and lost some time, dropping back in the rankings to finish third overall in a time of 1:40.06s.

Frustrated with her slight mistake on the second run but nevertheless pleased to make the podium, Piera said that she was happy with her results over four days of racing at Coronet Peak.

“It’s been a really good way to sharpen our focus for the rest of the season,” says Piera’s coach Jonny Rice. Piera will now travel to Australia to compete at Australia New Zealand Cup (ANC) races before returning to New Zealand to compete at the Audi quattro Winter Games NZ.

In the men’s race Willis Feasey also made a convincing start, laying down the third fastest time for run one.

“The course suited me,” he explains. “It was quite open which meant you could carry speed into each turn.”

Holding on to that same speed and feeling confident from the previous days’ results, Willis stepped things up a gear for run two. His overall time of 1:30.84 pushed him up to finish second overall behind Marc Gini (SUI) on 1:28.91. Semyel Bissig (SUI) finished third on 1:30.95s. 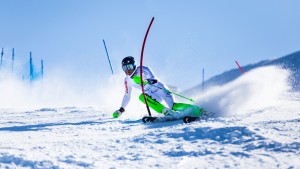