Top performances in challenging conditions  saw Austria’s Katharina Truppe and Belgium’s Sam Maes take the lead in the women’s and men’s events after outstanding runs on the ‘Outwide’ course at Rocky Gully.

19-year-old Maes is no newcomer to FIS podiums, after  stunning wins last week at Mt Hotham.

With Coronet Peak as his New Zealand training base, Maes was ecstatic about his win here today in another world-class men’s field. "First of all it was alot of fun. I had perfect snow for my first run and smashed it. The second run was tougher, as you run later in the day if you have a good first run. I fought the whole way and made a couple of mistakes but my skis ran very well," said a happy Maes. Mathias Graf of Austria and Matthias Roenngren of Sweden laid down scorching runs to finish second and third, completing an all-European men’s podium today.

Katharina Truppe of Austria showed her dominant form, leading after the first run and putting down a very fast second run in challenging conditions on course. Maryna Gasienica-Daniel of Poland skied a very strong run to finish in second place with Lena Duerr of Germany skiing strongly into third place. Alex Tilley of Great Britain and yesterday’s winner Alice Robinson of NZ were unable to complete the challenging second run course, putting them out of contention for the top places.

Racing continues tomorrow in the Audi quattro NZ Winter Games with the first day of slalom racing on the ‘Outwide’ Course at Coronet Peak. 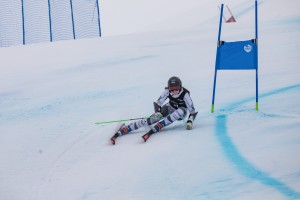