Willis Feasey (Twizel) claimed a convincing win and a career best result in the Giant Slalom (GS) on day one (Sunday 30 July).  He finished 1.62s ahead of Austrian racer Magnus Walch and Australia’s Harry Laidlaw to score 9.00 FIS points, the best GS result of his career so far. This gives him a world ranking of 54th, the highest GS ranking ever held by an NZ male.

Feasey is the national men’s Giant Slalom champion and will be looking to defend his title at the National Championships to be held at Coronet Peak next week (7-10 August). He will be joined by NZ men’s ski team mate Adam Barwood (Queenstown) who finished fourth in GS in Sunday’s race.

After an impressive third place finish in her first ever FIS race on Sunday, all eyes were on 15-year-old Queenstown racer Alice Robinson. She followed through with a win in Giant Slalom on Monday, beating Germany’s Julia Mutschlechner by 1.55s and Slovakia’s Barbara Kantorova by 2.45s to score 18.18 FIS points.

“I was extremely shocked, especially with the second result of 18.18 points,” Robinson said. “Going into the races I wasn’t focusing on results, I just wanted to ski well and bring my training into racing.”

Piera Hudson (Havelock North/ Wanaka) has had a strong start to the season, also improving her world ranking. She claimed two podium placings in the Slalom, finishing second on Tuesday and third in today’s race (Wednesday 2 August), as well as fifth in the Giant Slalom on Sunday. She will also be looking to defend her title in the Slalom at next week’s National Championships. 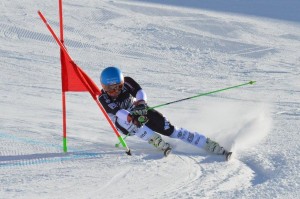