The two-day downhill series began on Sunday 15 September with Poland’s Maciej Bydlinski taking the win in the men’s event with a time of 1:42.31.

The hard packed snow made for excellent race conditions but only a very small field of 15 skiers started the men’s race.  There were not enough female competitors with FIS points for the women’s race to go ahead.

Day two of racing saw strong performances from the New Zealanders and Nick Prebble and Willis Feasey (Twizel) both winning podium spots in the downhill.

Nick Prebble won the first run and was just off the pace in the second run, but was able to secure second place with his time of 1:41.92.

“I was obviously disappointed with my result on the first day because I knew I could ski better than that,” said Nick Prebble.

“It was great to get on the podium at my home hill. The big victory for me, however, was winning the ANC downhill title which gives me bib 31 in all Nor-Am and Europa Cup downhills for the Northern Hemisphere season. So I am really stoked!”

Willis Feasey came from behind in the second run and secured third place overall in a time of 1:42.10.

Following on from his victory on day one Poland’s Maciej Bydlinksi was once again the fastest race, posting a time of 1:41:02.

Prebble continued his form for the third day of racing and in doing so claimed the national Super G title. Piera Hudson was the winner of the women’s national championship title.

Nick Prebble placed second overall with a time of 51:81 behind Poland’s Maciej Bydlinksi in 51.24. Willis Feasey was the second placed New Zealander and third fastest overall racer with his time of 51.82. Ben Griffin was the third New Zealander home, claiming sixth place overall and a time of 52.24.

Piera Hudson’s time of 56.47 put her in fourth place overall behind Greta Small (AUS) in 54:04, Barbara Kantorova (SVK) in 54:77 and Lavinia Chrystal (AUS) in 55:73. Harriet Miller-Brown and Eliza Grigg filled the second and third spots for New Zealand women with their respective times of 57:58 and 57:63.

New Zealand men claimed all three podium spots in the ANC Super G on day four of racing. Willis Feasey was the day’s fastest racer with a time of 50:61, followed by Nick Prebble in 50:73 and Ben Griffin third in 50:91.

Piera Hudson was once again the top placed New Zealand woman, her time of 54:36 enough to claim fourth place with Harriet Miller-Brown (Queenstown) sixth in a time of 55:80 and Eliza Grigg (Christchurch) seventh in 56:37.

With Super-Combined on the agenda for day five, it was the turn of Adam Barwood (Queenstown) to claim a podium spot.  Barwood was the second fastest racer overall and top New Zealand skier in a time of 1:26:51 behind Poland’s Maciej Bydlinski in 1:26:23. Matej Falat (SVK) rounded out the podium with a time of 1:26:66.

Piera Hudson continued her form as the fastest New Zealand woman, just off the podium in fourth place in a combined time of 1:34:44.

Adam Barwood was again the top performing Kiwi in Friday’s slalom race, taking sixth place in a time of 1:12:43 followed by Nick Prebble in seventh place in 1:12:83. Great Britain’s David Ryding was the fastest man, racing to the top of the podium in 1:09.56. Australian racers took second and third place with Luke Laidlaw in 1:10.60 and Mike Rishworth 1:11.05.

Piera Hudson closed out her week of racing with an eighth place finish, once again the fastest New Zealand woman with her time of 1:17.74. Eliza Grigg followed Hudson in tenth place on 1:18.46.

The weather called a halt to proceedings at the end of the week with the final race – the Giant Slalom – cancelled due to poor snow conditions following heavy rain. 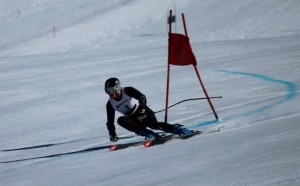