In a field of 89 of the top U12 racers in the Far West Northern region, Alice Robinson (QAST) placed first in slalom both days and Alex Hull (QAST) placed eighth also in slalom. Great result ladies, keep up the good work!

Piera Hudson is also enjoying a positive start to her year. At the recent German National Junior Champs she achieved her best result in Super G outside of New Zealand. She started bib 40 and ended up 19th, scoring a 56. This was also her second best points result.

The GS also went well for Piera where on the first run she halved her bib. A mistake on the flat on the second run cost her but overall her coach Jonny Rice reported “a good performance”.

Nick Prebble’s European racing campaign was sparked to life with a podium result at the National Junior Races (NJR) in Obersaxen, Switzerland. After falling on the first day, with a podium well within his sights, he came back the next day to place third.

Prebble’s next races, also part of the NJR series, were in Garmisch, Germany with two Super-G and one GS.

“In the SGs I just missed the podium in fourth place and blew the second race with a heavy mistake coming off the pitch,” Prebble explains. “In the GS an average first run held me in a creditable 13th place. In the second run I performed much better; however, I span out four gates from the finish.

“I was disappointed with my average skiing; however, the times were still right in there which shows my progress is definitely tracking on the right path.” 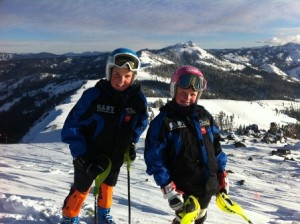