In the women’s event, which was also the first Platinum-level competition on this season’s AFP World Tour, the final run from Norway’s Tiril Sjaastad Christiansen saw her repeat her gold-winning performance from the 2013 Games.

In the men’s final, Wanaka’s local hero Jossi Wells had a disappointing first two runs but hoped to at least match his success in yesterday’s qualifying heats, where he laid down a blistering last run to qualify second behind Woods.

Wells did manage to nail a spectacular final run that saw him come agonisingly close to the podium, but his score of 87.00 was just two-tenths of a point behind Sochi Olympic gold medallist Joss Christensen, who claimed bronze.

Oystein Braaten from Norway also made his last run his best, with his score of 89.90 promoting him from fifth place to second and a hard-earned silver medal.

Her score of 85.80 pushed Italy’s Silvia Bertagna down to silver medal position with 82.80 from her second run, leaving Lisa Zimmermann of Germany to repeat her bronze medal from Winter Games NZ 2013, scoring 79.20 on her first run.

Christiansen was very aware of the weather that had seen the contest brought forward by a day because of a predicted front that was preceded by variable gusty winds.

“It was a bit scary with all the wind and I just tried to block it out [by] thinking that I’m the best in bad weather and it worked. It didn’t go very well the first two runs so I was bumped to fourth but I just felt the pressure and stomped my last run and it felt really good.

“It feels so good to be in New Zealand. It’s been two years since last time so I’m really happy right now. You’ll definitely see me back here. This is one of my favourite places.”

With most of the biggest names in world freeskiing at Cardrona for the Games, Woods was fizzing even before his win.

“This is the first platinum event on the AFP World Tour. Everyone was here. I was reading the start list to my friends at dinner and it just sounded like the world rankings. There’s only a small handful of guys not here and they’re injured – so I was proud as can be just to be on that start list.”

Head judge Lao Chazelas was pleased to see such a high calibre field.

“The level of competition was insanely good, like crazy, and comparable with the X Games. We had a lot of good riders but the one who made the show was Woodsy. It’s really nice to see this level in the middle of the northern summer.” 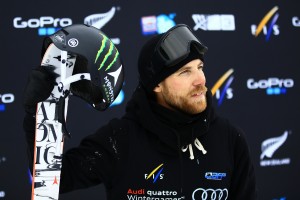