"Today was pretty personal for me," says Jossi. "The European Open was the first major international event I ever won, back in 2007. It's been pretty tough coming back from injury this season so to come back here and be back on my game and win, that's pretty special."

Jossi, a member of the Cardrona NZ Park & Pipe team, broke his neck in a training accident in September 2014. He returned to competition with the X Games in January this year and has spent the current northern hemisphere season getting back to top form.

The eighth edition of the EFO started with the men’s slopestyle qualification on Thursday. Already pre-qualified to the semi-final rounds, Jossi could relax and watch his brothers Beau-James and Jackson compete on the new slopestyle course which featured an unusual set up of two rail features followed by a kicker line with four jumps.Divided in to four heats, 97 skiers from 18 countries put down two runs, best one counted.

It proved to be a good day at the office for Team Wells with Beau-James qualifying in third place and Jackson in fourth, both progressing through to semis to join Jossi.

Friday’s semi-finals day brought bluebird conditions for the 28 competitors as they battled hard for a spot in the 10-man final. Swiss local and 2011 EFO winner Elias Ambühl claimed the highest score of the day on 87.33 points while NZ’s Jossi Wells would just scrape though in 10th place.

“I messed up the first jump and just made it through to finals. I knew I could do better,” explains Jossi.

Beau-James finished just ahead of him in ninth place while a hand down on the snow in an otherwise impressive run saw Jackson place 17th and just miss out on a spot in the finals.

Finals day served up flat light and intermittent fog to add to the riders’ challenge. The finalists had three runs to earn their top marks. Two runs down and Jossi Wells was still looking for the winning performance he knew he could give.

Opting to ski to the conditions and focus on execution rather than push his limits with his most technical tricks, Jossi went for a smooth run top to bottom.

Beau-James Wells finished in seventh place on 79.83 after landing back to back double cork 1080s, left and right, in what his brother Jossi would describe as his “best slopestyle run ever.”

The European Freeski Open is a gold level Association of Freeskiing Professionals (AFP) event. Jossi’s win has earned him valuable world ranking points ahead of the AFP World Tour Finals which take place in Whistler, Canada next month. 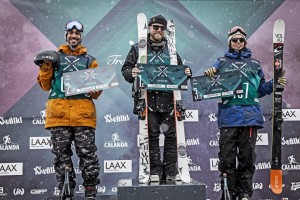