Competing at Coronet Peak in the technical disciplines of Giant Slalom (GS) and Slalom, racers have enjoyed calm conditions and cold overnight temperatures which have kept the snow firm enough for racing. The ANC start lists have included top athletes who compete on the World Cup and Europa Cup circuit. While the podium has been dominated by power house nations such as Norway, Austria and the USA all of whom have a long and impressive history in the world of ski racing, the young Kiwi racers have also made their mark.

Piera Hudson (18), the current national champion (Junior and Open) for women’s GS and Slalom, came away with the ANC yellow Giant Slalom bib. The yellow bib is awarded to the top performing female and male competitors from the ANC series races held in Australia and New Zealand. The yellow bib allows the holder a top 31 start position on the Europa Cup and NorAm circuit for the northern hemisphere season.

“I’m really happy to have won the ANC GS yellow bib, it was one of my goals for the season and probably the most important one to set myself up for the northern hemisphere competitions,” said Piera. “It's certainly an honour to have won it for New Zealand and I hope to make the most of its benefits in North America and Europe."

Queenstown’s Adam Barwood, who won the national championship title for Slalom at Coronet Peak last month, had another solid week of racing with a FIS points result in the Giant Slalom helping to improve his world ranking. He finished seventh, 1.23s off the leader, Adam Zampa of Slovakia.

He then placed eighth in Saturday’s Slalom, 1.79s off the leader, USA’s Hig Roberts, again making points and gaining the yellow bib to guarantee a 31 start position in Europa cup and World Cup starts.

Adam says that he is pleased with his season’s results and has ticked off some goals. “I feel that I am continually improving and although I made some costly mistakes in some of the runs, one of my goals was to get the yellow bib from the ANC series. Another was to improve my points.”

Willis Feasey (Twizel), current national GS champion, placed 13th in the Slalom on Friday, also managing to tick off his personal goal to score below 40 FIS points in Slalom.

“I managed to get a career best 21 points so I was very happy,” he said.

16 year old Elizabeth Reid (Invercargill) has been competing in International Ski Federation (FIS) races for the first time this NZ season and quietly making her way up the ranks. Elizabeth was the last racer to start the first run in Friday’s Slalom but finished 19th in a starting field of 46. The first run course was particularly challenging and saw just over half the field fail to finish.

“It’s been a great experience ski racing against senior athletes in FIS over the last few months,” said Elizabeth. “I’ve found the programme gruelling, physically exhausting at times and balancing all the priorities is only possible with the help of my coaches, trainers, teachers, friends- team mates and parents.”

The best result for Christchurch’s Nick Prebble at the Coronet Peak ANC was 15th place in the second GS. While Nick says, “It has been a disappointing racing season so far for me,” he feels that his training has him on track for the upcoming speed races at Mt Hutt where he will be competing on home ground and in his preferred disciplines. Nick will be looking for strong results in the Downhill and Super-G. He won the national title for Super G in 2013.

The final races in the ANC series will be held at Mt Hutt from 13 – 19 September. The National Championship races for Downhill and Super G will be held at the same time. 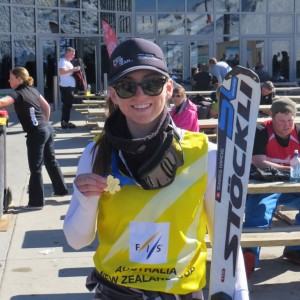