Byron Wells, who came close to earning a podium spot at the Olympic test event in 2013 with a fourth place finish, had been forced to withdraw due to an injury sustained in training. The New Zealand contingent for the halfpipe therefore comprised brothers Jossi and Beau-James Wells and team mate Lyndon Sheehan.

Whether despite of, or because of, Byron’s absence the remaining three were determined to show their fighting spirit. “Tonight we were ready for action,” explains Head Park & pipe Coach Tom Willmott.

A change of weather conditions had brought rain throughout the day turning to snow as competition began at the Extreme Park halfpipe in Rosa Khutor but, if anything, this put the Kiwis at ease.

“We know we can compete well in tough conditions, we’ve seen them in New Zealand,” said Tom Willmott. “It was also a reminder of last year’s test event where we also had some good results.”

The competition format allowed each rider two runs to post their best score before the top 12 moved through to finals competition. In the freeski halfpipe discipline athletes are judged on the degree of difficulty, variety and execution of each trick in their overall performance runs as well as amplitude out of and use of the pipe.

Beau-James Wells was the first of the New Zealanders to compete. Having shown glimpses of his future potential during last week’s slopestyle event where he finished in 21st position, the young skier was aiming to pull out and land more of the technical manoeuvres he has recently added to the trick bag.

The first run was solid, starting with the 540 and featuring back to back doubles and clean grabs. The judges liked the variety and awarded Beau-James with 76.80.

Lyndon Sheehan was the next Kiwi next to drop into the pipe. A knee tweak a month before the start of the games had affected his final build up and his coach would describe it as “pretty much a miracle Lyndon was able to compete at all.” However, recovery had gone well and Lyndon felt confident of achieving a finals placing.

Showing impressive amplitude, getting up to 4m height out of the pipe, he stomped his first run with a score of 78.20.

Last of the Kiwis to take to the pipe, Jossi Wells also came out firing. Throwing in the double 12 early in the piece and continuing through the run in confident style, Jossi scored 83.00 on the first run.

While the slopestyle had been prioritised as Jossi’s preferred event at this games there was no doubt that he had the tricks in hand to be able to make the halfpipe finals.

At the end of the first run, standings for the New Zealanders were: Jossi Wells 5th, Lyndon Sheehan 9th, Beau-James Wells 10th.

As run two got underway the snow began to fall more heavily, reducing visibility for the skiers and reducing their speed. For the most part the second run scores would be lower than the first.

Beau-James dropped in to the pipe for his second run, landing back to back doubles for a second time but coming away with a lower score of 66.40. The wait was on to see if he could hold on in the top 12 for a place in the finals.

Lyndon Sheehan was able to touch things up on his second run looking stylish with the left side then right side 900s and improving his score to 80.00.

As one of the last riders to complete their second run, when it came to his turn Jossi was already assured of a spot in the finals thanks to his earlier high score. His second run score of 49.40 would make no difference.

All three New Zealanders would move through to the Olympic finals with Jossi sitting in 5th, Lyndon 8th and Beau-James 10th.

Sleet and snow continued but as far as the competitors were concerned it was all in for the finals.

Beau-James showed style in his first run, but didn’t look too happy with his performance and earned a score of 62.00. Lyndon’s first run was big on tricks but a little sketchy on execution, only just holding on to the 1080 on the final move. His score was 55.20.

Jossi put down an impressive first run, executing high end tricks with clean landings and posting a score of 85.60. By the end of run one Jossi Wells was sitting in third place.

Stepping things up to a whole new level in his second run Beau-James Wells tidied up on execution to score a very credible 80.00.

Also cleaner on his second attempt but lacking the huge amplitude of his earlier runs, Lyndon Sheehan upped his score to 72.60.

With Canadian Mike Riddle posting 90.60 on his second run Jossi was pushed out of third place and the pressure was on for his second run. He couldn’t quite find the finesse of his first run and the score of 78.40 would not be enough to see Jossi Wells claim an Olympic podium. Jossi would finish agonisingly close in fourth place, ending his Sochi 2014 campaign with mixed feelings about the result.

“I’m feeling pretty happy,” he commented after the competition. “I definitely skied the best pipe runs I’ve done ever.

“I’m really happy with how I skied tonight; that’s what I came out here to do. I didn’t have any expectation tonight. To land those runs I did I was really, really happy. To come fourth is pretty cool for me for a pipe event, I haven’t really been riding a whole lot of pipe recently.”

After falling short of his own expectations in the slopestyle event Jossi said, “I wanted some redemption and that’s how it worked out.”

With fewer expectations on him in the halfpipe Jossi looked more relaxed and better able to execute his planned runs. Coach and father Bruce agreed that this may have been a contributing factor:

“Jossi’s ideal performance state is exactly what we saw there: a big grin on his face and having a great time.”

Meanwhile, Beau-James Wells, finishing in sixth place, was more than a little pleased with his result:

“I’ve never felt this good in my life. I just came sixth at the Olympics in halfpipe so I’m amazed, I’m so stoked!

“This is the number one proudest moment I’ve ever had. I’ve never felt this great before ever!”

Lyndon Sheehan’s ninth place finish was also commended by his coach Tom Willmott who had high praise for the entire team’s “outstanding performances.”

“It was a supreme team effort. The wax techs did an absolutely fantastic job… and the physios – all the hard work going into keeping the guys in one piece. I can’t say enough good things about our fantastic support team.”

“The guys held themselves together and focused on their own performances and pulled off fantastic runs. Personal bests all round basically.” 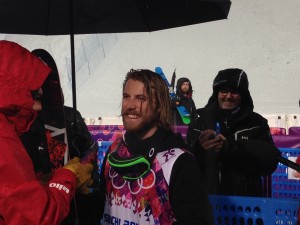