After three days of snow and then rain, avalanche risk in the Austrian resort was exceptionally high and event organisers were forced to move competition to a new, safer venue. As well as the natural terrain, competitors needed to make maximum use of man-made features including wooden drops and jumps.

“It was strange but that was all they had so I picked out a run where I could go fast and pretty much straight-line the course, going big and getting grabs,” explains Finn. “I didn’t expect to win but my strategy turned out to be a wise choice as other riders did tricks but didn’t go as big or as fast.”

The Freeride Junior Tour is an international circuit dedicated to young skiers and snowboarders from 14 to 17 years old. The aim of the Tour is to develop the talents of tomorrow and encourage youth participation in the sport of freeride. More info here 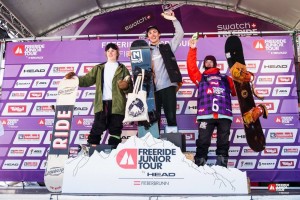