Avalanche control work carried out at the venue the day before the event caused a large area of the competition face to slide, limiting the riders’ line choices.

“There was only a corner of the venue safe so we changed up our runs for just the corner and got set to drop,” explains Finn.

“I dropped in, took a deep breath and charged. All I was thinking about was getting my grabs in my airs. First and second drops were nice and smooth then going in to my third hit I had to cross avalanche debris which got me off balance and I almost fell, just catching myself as I got over it. Then I got my third hit and charged to the finish. Overall I was happy with my run and had a great time competing.”

This is Finn’s second podium result of the 2017 European season after he finished third at the Eldorado Freeride Junior Vallnord three star event in Andorra on 11 February. Skier Hugo Cameron has enjoyed similar success, also finishing second at a Freeride Junior Tour competition in Switzerland on 16 January. 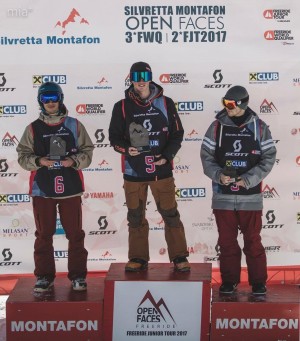