Athletes from as far as the United States, New Zealand, and Mexico, representing over ten countries, descended on the Andorran freeride mecca on Saturday to show spectators just what they have to throw down to push the sport’s limits. Their age might be described as “junior” but their skills certainly are not.

After a dawn hike to the venue finish line, riders were ferried the last stretch to the summit with a short heli ride where they scoped the competition face offering a plethora of options for creative line choices and a multitude of airs. Weather conditions were close to optimal, providing the young riders with clear skies and soft, spring snow. The competition face topped out at 2660m and offered just over 300 vertical metres of featured terrain at an average of 35° for the young competitors to test their skills.

Dion Newport, founder of the New Zealand Junior Freeride Tour (NZJFT) described the competition as one of “the proudest moments of my life to watch three Kiwis compete in the Freeride Junior World Championships. All the boys had the top line choices of the day and Finn rode incredibly well in male snowboard to take third place."

Freeride World Tour vet Sam Smoothy was also on hand to watch the competition and said, “After spending time with the boys on the NZJFT and in Europe I was really sure we had a strong team that was capable of representing NZ really strongly. Not only was the team’s riding a credit, the boys handled themselves likes pros and impressed many with their riding and attitude.”

Hometown hero Maria Naudi Descarrega (AND) brought home the win in the men’s snowboard with a solidly stomped run featuring massive airs on the skiers’ right of the venue. Loic Aubert (SUI) followed in second with solid riding and a few grabs, bringing him just in front of Finn Duffy’s (NZL) playful run with plentiful smaller airs.

Skier Hugo Cameron came hot out of the start gates, attacking the course at pace and taking a rock drop near the top of the course before coming unstuck and losing a ski before he’d really had a chance to show the judges his full potential. Craig Murray also made a speedy start, opting for some exposed terrain and rock drops but a backseat landing and bounce off his back did nothing to help his score and he finished 22nd. Hugo Cameron finished 28th. 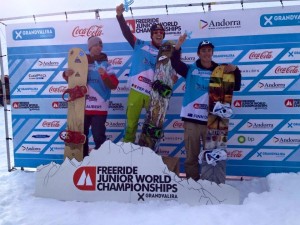