It has been a busy weekend of competition for New Zealand’s top skiers and snowboarders, with athletes competing at three World Cups in Austria, China and the USA. Olympic bronze medallist Zoi Sadowski-Synnott (Wanaka) achieved the best result with a fourth place finish at the Air + Style Snowboard Big Air World Cup held at the iconic Bird’s Nest stadium in Beijing.

Her first competition of the northern hemisphere season, Zoi successfully executed a double wildcat nosegrab (her first with this grab in competition, recently learnt in Japan) along with the switch back nine, the trick she used in her bronze-medal winning run at the Olympic Games, for a combined score of 150.25.

Finals didn't go quite to plan for fifth place qualifier Tiarn Collins (Queenstown) who crashed on his first and second run and finished in 11th place.

The men’s competition saw the riders pushing the very limits of the Air + Style jump, trying to milk every last inch out of the landing as they pushed for more amplitude and bigger tricks. Sven Thorgren (SWE) emerged as the winner, Takeru Otsuka (JPN) second and Clemens Millauer (AUT) third.

Meanwhile, the FIS Freeski World Cup was back in business this week at the world-famous Stubai Zoo snowpark in Austria, with the first slopestyle competition of the season. NZ's Finn Bilous achieved a solid result, finishing in eighth place.

Initially scheduled for Saturday, the finals in Stubai had been moved to Friday following the unfavourable weather forecast. The jury had made just the right decision as mild temperatures and perfect conditions played along to provide a truly top-tier show for the top 18 men selected through the qualification round on Thursday.

After landing his first run with a small mistake on the rails, Finn  decided to change things up for run two in an effort to really up the score but came off the rails  early on his second attempt and his initial score of 83.88 would be his best.

Disappointed not to land his second run and push for a higher placing, Finn was nevertheless happy to have achieved a solid result - just five points off the winner - in his first slopestyle competition since March.

The first place on the day went to the veteran Henrik Harlaut (SWE). The second place went to the US rookie Mac Forehand with Ferdinand Dahl (NOR) finishing the competition in third.

Alpine ski racer Piera Hudson (Havelock North) has started a season off with a bang, competing at the legendary Killington Cup in Vermont, USA in front of a crowd of 18,000. Piera successfully completed her first run of the Giant Slalom but did not meet the cut off time to qualify for a second run.

"I was really happy with how I skied in the Killington World Cup today,” said Piera. “I had fast splits up until the last pitch where I made a couple of mistakes which cost me but it was a good start to the season and something to build from." 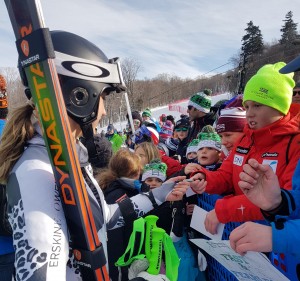