St Moritz, SUI (20 February 2017) - The World Champs in St Moritz have now wrapped up with the New Zealand team coming away with some strong results and positive learning experiences.

Adam Barwood finished 31st in GS and Willis Feasey 34th in Super-G. Adam and Willis also skied excellent Slalom qualifying races, finishing fourth and eighth. In the World Champs race Willis was gunning for the flip in the Slalom before he came out after the second split.

“There are no short cuts in sport and Adam and Willis are now showing given time and the opportunity what is possible,” says their coach Nils Coberger. “Both boys have matured as racers at this event. Their splits and second run times have shown what they are capable of at the highest level. They now have a belief in themselves that they have the technical and tactical skills to compete with the very best in the world. This well-earned belief in themselves is the basis of their mental shift to win at this level.”

“It's nice to see how much closer I am than at Beaver Creek World Champs (in 2015)!” says Adam. “I was really happy with the second run of GS which put me into 31st (28th on the run) I just need to do that first run now!”

Eliza Grigg scored a personal best result in the ladies’ GS qualification and describes World Champs as “an incredible experience!”

“Heading into the qualification race I had the sole goal of making the top 25. So to place seventh, score a PB of 29.84 and have the third fastest time second run was beyond incredible. I was ecstatic to outright qualify for the main event for my first World Champs. This brought about the goal of making top 60 to qualify for the second run of  the main event. I was thrilled to achieve that goal, finishing in the top 50 from bib 73. I’m pleased with how I performed in my first major event and what I’ve learnt from it all is priceless.”

Piera Hudson had a good Slalom qualification race, finishing in 9th but says overall “World Champs didn't go to plan for me this time.”

“I wasn't able to find my usual race intensity in the GS until the second run where I had a fast top split before a technical error on the pitch ended my race," she explains.

"On the Slalom day I crashed in a warm up course on my way down to the start and hurt my knee, I tried to race with the pain but sadly my knee buckled under me on the third gate and I crashed.”

All the best to Piera for a speedy recovery before the lead up to World Juniors begins!

The team now have five more weeks of FIS, Nor-Am and World Cup racing before the end of the season, the goal being to lower FIS points and Olympic criteria selection. 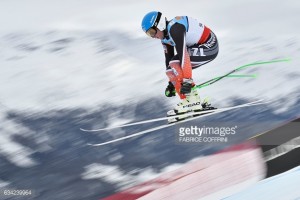