Racing took place on the Outwide Run in the Rocky Gully Race Arena with racers enjoying firm snow conditions for the first Giant Slalom race of the NZ season. The day looked set for a repeat of the 2017 championships with defending champions Alice Robinson and Willis Feasey both initially leading the NZ fields; however, the second run would see a shake up in the results.

The women were the first to race with Alice starting in bib three and making short work of a fast and straight course set to clock a time of 52.76s and secure a lead.

“It was solid, no problems. I just need to charge a bit harder on run two,” said Alice.

With Piera Hudson just 0.40s back in second place, the scene was set for a tight battle for the national title.

In the men’s field Willis Feasey finished his first run just 0.05s ahead of team mate Adam Barwood and knew he had work still to do to secure the top step of the podium.

“I backed off a little bit, that cost me a bit of time. I need to put it down the hill a bit more and clean things up,” explained Willis.

Run two got underway after a course reset with Piera finding herself more at home on the “turnier” course and laying down a good second run. Alice was next in the start gate but a mistake on the third last gate would cause her to ski out of the course and miss out on a podium finish, leaving team mate Piera Hudson unchallenged for the race win and the national title.

“Winning a national title is always special and today was a strong field with some good young racers coming through so I’m really happy,” said Piera.

Queenstown racers Alexandra Hull and Eden McKay were the second and third fastest NZ racers respectively, placing 8th and 10th on overall results. Both missed out on racing at last year’s championships due to injury and were surprised and delighted to finish in the medals today.

“I’m pretty proud of that,” said Alex. “I didn’t have super high expectations because I haven’t raced in a while but I was aiming for top 20. It’s awesome to finish in the top three New Zealanders.”

Eden added, “I’m pretty excited, it’s a bit unreal to come back after two years of injury and be back up there. I had no expectations, I just wanted to have a good run and ski clean. I’m happy with that.”

Flat light added to the challenge for the men’s second run but NZ’s Adam Barwood was able to “iron out a few mistakes” and jump ahead of team mate Willis Feasey to claim the national title, finishing 11th overall. Willis dropped back in to 14th overall but held on to a place on the national podium, second fastest Kiwi.

Racing continues at Coronet Peak tomorrow with the Coronet Cup Giant Slalom. The National Slalom Championship title will be contested on Tuesday followed by the Coronet Cup Slalom on Wednesday. 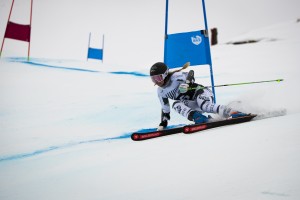