Queenstown, New Zealand (19 August 2014) – The New Zealand Alpine National Slalom Championships were held at Coronet Peak today, the official ski area partner of the New Zealand Alpine Ski Team. Olympian Adam Barwood (Queenstown) would be looking to defend the national title which he has held since 2012. In the women’s field Piera Hudson (Hawke’s Bay/ Wanaka) would be aiming to claim her second national championship title for the season having taken out the national title in the Giant Slalom on Sunday.

The Slalom course was set on the Outwide run with racers enjoying cold, clear conditions perfect for racing. Today’s races attracted an international field of 70 men and 25 women.

Battling a shoulder injury sustained in a fall during yesterday’s Coronet Cup Giant Slalom race, Piera Hudson’s first run time of 50.14s put her in to ninth place overall. While not entirely happy with her performance she was relieved to be sitting in top place amongst the New Zealand women.

Racing at International Ski Federation (FIS) level for the first year this year, Elizabeth Reid (Invercargill) came into today’s event with a clear goal in mind: to take second place amongst the New Zealand women and earn her national podium spot. By the end of her first run she was on track to achieve the goal, sitting just behind Piera Hudson in a time of 50.63s and 10th overall.

Cantabrian Eliza Grigg’s time of 51.03s put her third on national rankings after the first run.

Norwegian racer Julie Mohagen posted the fastest overall time for the first run in 47.63s. Of the 25 female racers, nine failed to finish the first run.

Adam Barwood, who achieved a personal best result earlier this year when he placed 25th in the Slalom at the Olympic Winter Games in Sochi, was the second racer to take to the course in the men’s field today. His first run time of 47.21s put him into 10th position overall and first place amongst the NZ field.

Nick Prebble (Christchurch) posted a time of 49.16s to put him in second on national rankings, 21st overall. While Willis Feasey (Twizel) who claimed the national Giant Slalom title on Sunday posted a time of 50.29s for 28th overall.

The second run got underway after a course re-set and visual inspection for the racers. Piera Hudson was the last of the NZ women to take the course and just snatched the national championship title with her overall time of 1:39.48s, Elizabeth Reid only just behind her in 1:39.60s. Eliza Grigg took third spot for the NZ women with a time of 1:40.25s.

“I’m really relived and of course happy to take the title,” said Piera Hudson. “I’m a bit disappointed with the way I skied though. I try to focus more on my skiing and not the overall outcome but today I let it all get to me and it showed in my skiing.”

Willis Feasey was the first of the NZ men to start his second run. All looked to be going smoothly until three quarters of the way down when a mistake led to a missed gate followed by a hike back up the hill. Successfully through the gate, Willis finished his run in 1:46.79s. Nick Prebble followed with a time of 1:44.32s.

Adam Barwood put together a convincing second run, finishing in a time of 1:38.32s to claim the national title with Nick Prebble second and Willis Feasey third.

“It was a solid run and I’m really happy to win the national title,” commented Adam.

Image: Piera Hudson on course in the National Championship Slalom at Coronet Peak 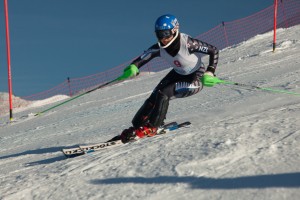