Coming off a win yesterday Zoi explained “I was super stoked with yesterday, I actually couldn’t believe it. Coming into today I just wanted to land a backside 1260 as I have never actually done one before and I did one in practice, and I was feeling good.”

Zoi landed a frontside double 1080 with a melon grab in her first run, scoring a 40 and a backside 1080 in her second run scoring 36. She swiftly replaced the 36 with a 45, stomping a huge backside 1260 in run three. This is the first time Zoi has landed this trick in competition and her first X Games Big Air gold medal.

X Games Big Air is a jam format with each run scored out of 50 points. The top two scores (must be from two different tricks) are combined to give a total score out of 100. The athlete with the highest combined score is crowned the winner.

“I am just stoked to be out here snowboarding and competing with all the girls, everyone is pushing everyone, it’s really sick.” Zoi explained when asking about her incredible progression.

Following on from yesterday’s slopestyle gold medal performance Zoi has proven she is just as capable in the discipline of Big Air. This brings Zoi’s X Game medal total to seven medals, including four golds.

This is the final competition for Zoi before she heads to the Beijing 2022 Olympic Winter Games where she will compete in both Slopestyle and Big Air for New Zealand. 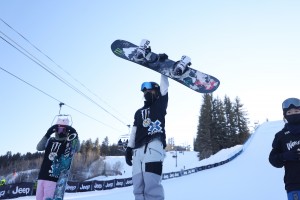