Last to drop of the six female finalists, Sadowski Synnott, recorded her top score of 87.35 on her final run of three but had the luxury of a victory lap with her second run score of 85.18 already enough to edge off Spencer O'Brien (CAN; 81.22) and last year's winner Silvia Mittermueller (GER, 73.40) to the respective second and third rank.

“My last run was the best, I felt so comfortable,” explains Sadowski Synnott. “I liked the first part of the track – the rails. It was a great week here, and I'm really looking forward to next week´s junior world championships here in Spindleruv Mlyn.”

Sadowski Synnott is the third Kiwi in history since Juliane Bray (Sapporo, 2001) and Christy Prior (Stoneham, 2014) to win a snowboard World Cup event.

Sadowski Synnott will remain in the Czech resort of Spindleruv Mlyn to compete in the Junior World Championship Slopestyle and Big Air from 30 March to 1 April. 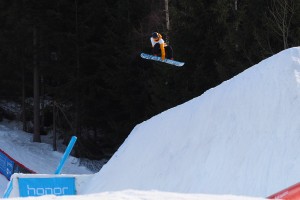