Zoi, the overall Women’s Snowboard winner had a great run, which included three 720 varieties and a switch back 900 on the jumps. Zoi, who scored 84.00 points for her winning run, explained that the Torpedo 7 NZ Showdown was her first slopestyle competition since the Winter X Games in Norway in March earlier this year and she was “stoked to land her run after taking so much time off from competing.”. Zoi enjoyed competing with the younger athletes, explaining that it was “sick competing against the junior girls because I remember when I was their age on the same course and seeing what they are coming up with is pretty cool.”. Queenstown based athlete Cool Wakushima finished in second place with a score of 65.33 and Kaiya Collins, younger sister of Tiarn, rounded out the podium in third with a respectable score of 57.33.

Tiarn Collins is the overall Men’s Snowboard winner, scoring an outstanding 98.00 on his second run with a run consisting of technical rail tricks and linking a switch backside 1260 to a backside 1260 on the third and fourth jumps. 14 year old Campbell Melville Ives finished in second place, with a score of 86.67, holding his own in a strong field of athletes up to six years his senior. Samuel Finnemore rounded out the Men’s Snowboard Podium, just a hair behind Campbell, with a score of 86.00.

The top spot on the overall Men’s Freeski Podium was hotly contested between Ben Barclay and Nico Porteous, who both linked together incredibly technical runs, showing a high level of skill spinning in all four directions down the course. Ben Barclay had an impressive run from top to bottom, spinning both ways onto the rails and linking a right double cork 1260 with a safety grab to a switch left double cork 1440 with a high mute grab on the third and fourth jump, scoring a 95.33 for his winning run.

Nico Porteous, more commonly known for his prowess in the halfpipe, linked together a left double 1440 safety and a right double 1620 safety on the third and fourth jumps, scoring a 92.67. Head Freeski Judge Tori Beattie explained that Nico displayed a great variety of spin direction on the jumps but the judges chose Ben’s run as the winner because of his execution and variety of grabs as well as spinning all four directions (left, right, switch left and switch right). Luca Harrington rounded out the podium in third with a score of 86.33.

Ben Barclay explained “I had an awesome day, it was just good fun to be around the whole crew and all the different age groups who were in there, it shows the good development through New Zealand skiing. Good conditions, great course and a great day”.

Ella Miles landed on top of the Women’s Freeski Podium with a score of 52.00. Head Freeski judge Tori Beattie explained that “Ella had two nice slides through the rails, jumped around to switch and did a switch 540 on the first jump, a right 540 on the second jump and finished off her run with a straight air on the last jump. She showed great spins and good rail sliding skills.” Sylvia Trotter joined Ella on the podium in second place.

Along with the overall podiums the athletes were also ranked against each other within their age divisions. The Under 14 (years old) athletes stepped up to the Big Bucks course today, the largest course they have competed on during the 2020 Snow Sports NZ Freestyle Series. 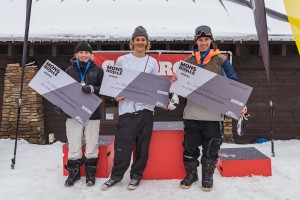