Incremental weather and a variable headwind affected the FIS Slopestyle World Cup season opener and resulted in many of the women’s field struggling to find their feet for their first run. Sadowski-Synnott took the weather in her stride and put down the first clean run of the event with a technical and impressive first run that put her comfortably in first position.

Sadowski-Synnott’s first run consisted of a 50/50 on, 270 off on the first rail feature, a 50/50 to front board slide on the waterfall rail, a boardslide to 450 under flip on the pole jam, a cab 540 under flip on the quarter pipe, frontside 720 mute on jump one, a backside 720 on jump two and a frontside 180 in with a switch backside 540 out of the final creative snow feature, nicknamed the birdbath.

Snowboarding powerhouse Jamie Anderson (USA) put down a solid second run, including a double cab 900, to squeeze Sadowski-Synnott out of the gold medal position by less than two points. Tess Coady (AUS) rounded out the podium in third.

Sadowski-Synnott explained how this season is like no other. “With the uncertainty around the number of events that are going to happen, you’re really dropping in every time like it’s your last competition, you never know when the next one is going to be.”

She explained that the events also give her an opportunity to showcase her ever deepening bag of tricks and see how she is stacking up against the best snowboarders in the world.

“The time in New Zealand [2020 Winter Season] has been the most valuable thing for my snowboarding, especially this past season having access to a full slopestyle and big air to be able to train and learn. The park crew at Cardrona were helping us out with any features we needed like the quarter pipe.”

Next up for Sadowski-Synnott is the prestigious Aspen Winter X Games taking place over the 29th – 31st of January in Colorado, USA. 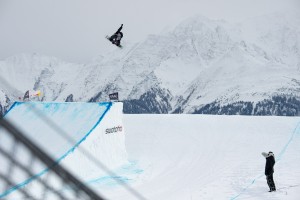