Taking a convincing lead right from the start, Zoi maintained her lead through all four runs to claim the top spot against the world’s best today with a run that has made history.

“It means so much to me, everyone was absolutely ripping, that was the sickest contest I have ever been a part of. To put that run down, I have been working towards it for a while, so I am just so stoked."

In her second run, after lacing together a super technical rail section that included a blunt 450 out of the second rail, she landed her frontside double 1080 into her backside double 1080, becoming the first woman to ever land this combination in competition.

Zoi explained “I have been working towards that for the last year, and it was my goal to put it down here, so I am super happy.”

This was the third X Games gold medal of Zoi’s career and her third major event podium finish of the 2022 season.

She was joined on the podium by two-time Winter Olympic slopestyle gold medalist Jamie Anderson (USA) in second and Laurie Blouin (CAN) in third.

This was the final event for Zoi before she heads to China for the Beijing 2022 Olympic Winter Games where she will be representing New Zealand in both snowboard slopestyle and big air. 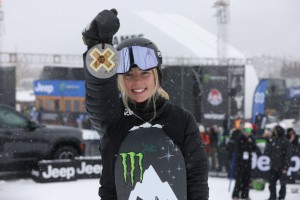