"I just wanted to go and land those two tricks in a row and hopefully get a chance on my third run to throw something I’ve never landed before and I did that. in that second jump it was the best I’ve done it before, so I was just so stoked," said Sadowski-Synnott.

Zoi then faced an anxious wait to find out if she'd won a medal.

“I had to wait as I was in third, and there were some heavy hitters and the last girl didn’t quite land and I realised I was in third. It was a pretty pretty crazy feeling when I found out."

“What a fantastic moment for New Zealand and for Zoi. We congratulate her wholeheartedly."
"At just sixteen years of age, Zoi has shown incredible skill, determination and resilience to make a significant mark on New Zealand sporting history.

"She showed us what she is capable of earlier this week and, today, pulled it all together to perform at the highest level of international sport. She has inspired New Zealanders by winning our second ever Olympic Winter Games medal.

"We warmly congratulate her and thank her for her contribution to New Zealand sport." 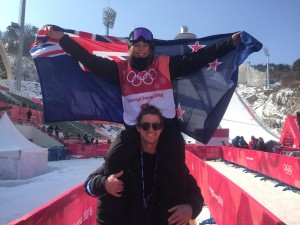