Zoi Sadowski-Synnott has continued her incredible season by claiming the bronze medal in the X Games Aspen Snowboard Big Air this morning.

Sadowski-Synnott landed a front 1080 and a back 1080 for a combined score of 86 to claim her second medal at the 2021 X Games Aspen and the fifth X Games medal of her career.

“To get on the podium was amazing because of how high the level of Big Air is right now, my goal for the event was to land back 1080 and front 1080, that’s what I came here to do so I am super happy.”

After a 24 hour delay due to unfavourable weather conditions on Sunday, the conditions were perfect this morning.

Sadowski-Synnott crashed her first run, but shook it off and regained her form landing a front 1080 on her second run, scoring an impressive 44.

In her third run she attempted a massive back 1080 but couldn’t quite get it to her feet. Sadowski-Synnott gave the back 1080 another go in run four and stomped it, rewarded with a score of 42 moving her into the bronze medal position.

She gave it everything on her fifth and final run to get into the top spot, attempting a huge backside 1260 but couldn’t quite stick the landing.

Jamie Anderson (USA) won gold and added her 19th X Games medal to her collection. Miyabi Onitsuka (JPN) claimed the silver medal. Although Onitsuka had the same combined score as Sadowski-Synnott, she held the higher single trick score (47) which ranked her ahead of the Kiwi.

Big Air consists of a 30 minute jam format where the athletes take as many runs as they can within the time window. Each jump is scored out of 50 and their top two scoring tricks are combined to give a ranking out of 100. 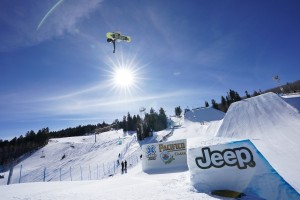