Cardrona, New Zealand (30 August 2018) – The Big Bucks Park at Cardrona Alpine Resort was the place to be today for high flying action in the FIS Junior Freestyle Ski and Snowboard World Championships 2018 at the Audi quattro Winter Games NZ. Competitors welcomed blue skies and calm conditions for the qualifying rounds of the JWC Freeski and Snowboard Slopestyle.

12 men in both Freeski and Snowboard, and eight ladies in Snowboard will move through to tomorrow’s (Friday) finals. Ladies’ Freeski Slopestyle will run tomorrow as a straight final.

After taking out gold in women’s Snowboard Big Air yesterday, Japan’s Kokomo Murase (JPN) was back on top form, landing the highest qualifying score in the ladies’ Snowboard field, just ahead of hometown hero Zoi Sadowski-Synnott.

“I’m feeling good,” said Zoi. “First run went well, I was just a bit sketchy. I want to step up my tricks and clean it up a bit. We’ve got tomorrow to look forward to and I’m super happy to be competing. It’s just nice to be at home, having my friends and family watching and getting to ride this amazing course.”

Taisei Yamamoto (JPN) was a standout in men’s freeski with the most technical rail line of the day, putting him top of heat one, while Ryan Stevenson (USA) and Birk Ruud (NOR) had a close battle for the top spot in heat two. Stevenson just pulled ahead with a more technical combination of tricks on the jump line.

The slopestyle events are also sanctioned by the AFP at gold level for freeski and by the World Snowboard Tour at national level for snowboard. 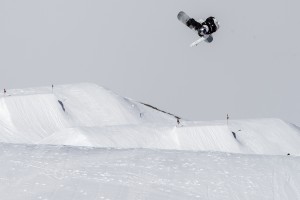