Beijing (CHN) - The 2018 Air + Style Beijing big air World Cup went down on Saturday night at the iconic Bird’s Nest stadium with a heavy showing from the six ladies and 11 men in the finals. Zoi Sadowski-Synnott achieved the top result among the NZ team, finishing in fourth place.

Zoi successfully executed a double wildcat nosegrab (her first with this grab in competition, recently learnt in Japan) along with the switch back nine, the trick she used in her bronze-medal winning run at the Olympic Games, for a combined scored of 150.25.

Second place went to Miyabi Onitsuka (JPN) who also stomped a backside double cork 1080 on her first hit, and then followed that up with a cab 900 stalefish for a combined score of 176.00 and her third-straight runner-up result of the season.

Third on the day was Laurie Blouin (CAN), whose cab double underflip and frontside 900 tail grab two-jump combo gave her a score of 156.00 and her first podium of the season.

Finals didn't go quite to plan for fifth place qualifier Tiarn Collins who crashed on his first and second run and finished in 11th place.

The men’s competition saw the riders pushing the very limits of the Air + Style jump, trying to milk every last inch out of the landing as they pushed for more amplitude and bigger tricks.

Thorgren came into finals as the top qualifier, which was an impressive feat all on its own in what was his first competition back after a lengthy break due to a serious shoulder injury.

Dropping last in the first run Thorgren once again put down the backside 1440 nose grab that earned him top spot in qualifications for a score of 90.25, though he would find himself sitting in second after Max Parrot (CAN) put down the top-scoring jump of run one.

However, after falling on his second run and watching Takeru Otsuka (JPN) jump into first place with his final hit while Parrot fell on both of his next two runs, it was down to Thorgren with the last run of the evening to step up and make something special happen.

And that he did, putting down a frontside triple cork 1440 mute that was arguably the biggest jump of anyone’s all evening, earning himself the highest score of the men's competition with a 93.75 and a two-jump total of 184.00 for the win.

Otsuka - landing a cab triple 1440 mute and a frontside triple 1440 mute - finished in second with a score of 176.25, giving him his third podium in three World Cup competitions this season and putting him in sole possession of the yellow leader’s bib atop the World Cup rankings after his co-leader heading into the event, Chris Corning (USA), struggled on Saturday.

Third place and his first career World Cup podium went to Clemens Millauer (AUT), who lead the field right up until Otsuka and Thorgren dropped in for their last runs on the strength of his backside triple 1440 mute and super-stylish frontside double corked 1440 tail grab for a score 169.00. 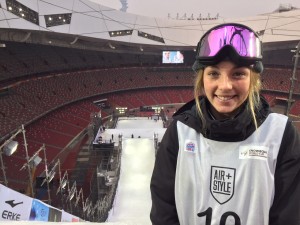