Zeestraten, Comber Through to Semi at Snowboard World Champs

The women’s slopestyle event, which had been scheduled to take place this morning, had to be abandoned soon after its start due to strong winds, plummeting temperatures and an icy course. The event has been postponed until tomorrow at 9:50 AM (training at 9 AM).

As a result of the new time frame, there will be no semi finals and the top three women of both qualifying heats will directly go into the training for the finals which will go down at 12 PM.

A very slight improvement in conditions meant that the men’s qualifying heats could go ahead, although many competitors were visibly rattled by the tough conditions. Snow Sports NZ’s Head Park & Pipe Coach, Tom Willmott, praised the New Zealand men for their professional approach and positive attitude under very trying conditions. Willmott referred to the course as “big and burly” and said with the size of the jumps and challenging conditions “there was nowhere to hide.” Competitors needed to be “smart, positive and mentally strong.”

Stef Zeestraten proved himself well and truly up to the task, placing third in his heat, achieving the sixth highest score of the day and progressing to semi-finals.  Ben Comber crashed out on his first run, but played it safe in his second to place fifth in his heat and also progress to semi-finals. Both Zeestraten and Comber are now guaranteed a top-20 finish at World Championships.

“Quebec is freezing cold but I had a good time today and am keen to send it some more tomorrow,” commented Zeestraten.

The World Snowboard Championships provide athletes with the opportunity to gain qualifying points for the Winter Olympic Games in Sochi, Russia in February 2014. Each participating nation is entitled to have four riders entered in each discipline. The event is Stoneham has attracted a world-class field of competitors including Olympic silver medallist Petja Piiroinen and current World Champion Charles Guldemond.

Here is the list of men competing for Gold, Silver and Bronze in the slopestyle tomorrow: 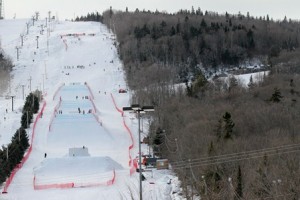