Young Freeskiers and Snowboarders Take Competition to the Next Level

For several NZ athletes it was their first experience of FIS level competition and an opportunity to earn the qualification points needed to compete at the World Cup events being staged as part of next month’s Audi quattro Winter Games NZ.

These Continental Cup events are supported by the Winter Games NZ Leverage and Legacy Programme which, alongside Snow Sports NZ and Sport NZ, aims to grow participation and achievement in snow sports.

Today’s field also comprised seasoned athletes such as US freeskier, Olympian and X Games medallist Keri Herman and NZ Olympian, freeskier Beau-James Wells (Wanaka), both looking for a warm up ahead of the Winter Games NZ.

Competitors had three runs to impress the judges with their best run score counting for final placings. Strong gusty winds added some challenge to the day but judges commented that the riders did well to cope with the conditions.

Keri Herman was the first competitor to drop into the course which comprised three jib features at the top with both technical and easier options, and three progressively larger jumps at the bottom. Setting the bar for the female ski competitors, Keri put together a clean, well-controlled run and left little doubt that her day would end on the podium.

Adie Lawrence (Queenstown) put together a solid first run and stepped up on the second run to improve her score but only enough to finish second overall behind the US rider. Natasha Drury (Auckland) finished in third for the women’s freeski podium.

“I’m excited to be competing for the first time this season,” says Keri who has made a successful recovery from an injury sustained at the beginning of the year. “It’s good to get my head back in the zone ready for Winter Games next month.”

The change about came on the second run with Beau tidying things up and leap frogging into the top spot. With Jackson and Finn unable to improve their initial scores over run two or three the podium was decided: Beau-James Wells first, Jackson Wells second, Finn Bilous third.

“I’m really pleased to have my brother Jackson on the podium with me but it’s always nice to win the sibling rivalry,” joked Beau.

The men’s snowboard field gave the judges a hard job with some particularly close scores in the middle of the pack, only half a point separating Fletcher Craig (Te Awamutu) in fourth and Lachlan Blackmore (Auckland) in fifth.

Tiarn Collins (Queenstown) was the highest scorer, bucking the day’s trend and saving his best until last with an impressive 93 points, ahead of Argentina’s Martin Jaureguialzo in second on 80.75 and Liam Whiley in third on 78 points.

Tiarn impressed the judges by stepping up his final run and landing the only 1080 trick of the snowboard competition.

“My goal was really just to land my run,” explained Tiarn. “I wanted to get the front 10 but I couldn’t land it in practice so I was feeling pretty nervous. I got lucky on my third run.”

Zoi Sadowski Synnott (Wanaka) exceeded her own expectations for her very first FIS competition by winning the women’s snowboard competition.

Zoi posted her highest score with her first run. “I wanted to do better on my second two runs and land my step up run,” she explains. It wasn’t to be but, nevertheless she was modestly “pleased” with the end result. 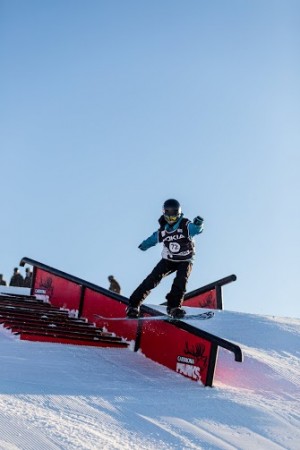