Weather and snow conditions at Mt Hutt were absolutely perfect for today’s racing with clear skies, excellent visibility and fast snow. With the 2014 Winter Paralympic Games only months away the event represented an opportunity for athletes to gain valuable qualifying points and the world’s best adaptive skiers - including teams from Russia, USA, Australia, The Netherlands, Italy and Canada – were in attendance. That Peters - who only began ski racing three years ago – was able to claim victory against such a strong field bodes well for his Paralympic qualifying campaign.

The Super Combined event requires skiers to display both speed and technical skill. Skiers must complete one run of a Super-G course followed by one Slalom run with times from each run combined to give an overall total. Peters placed first in his Super-G event and although his second run in the Slalom wasn’t quite as polished it was enough to keep him at the top of the leader board.

“I’m stoked, really pleased, with how things went today,” says Peters. “I was especially happy with the Super-G run. The Slalom was a little sketchy at the top but I pulled it together as I got into the rhythm.”

The day brought mixed results for New Zealand Paralympic gold medallist, Adam Hall. A solid second place finish in the Super-G made for a good start to the day’s proceedings; however, a crash at the second to last gate of the Slalom course meant Hall finished in fifth place for the men’s Standing Super Combined.

“Unfortunately that’s how ski racing sometimes goes,” remarked a philosophical Hall. “We’ll move on from it and carry on training.”

Racing continues at Mt Hutt tomorrow with World Cup Super G scheduled to start at 9.30am and a forecast for more excellent weather conditions. 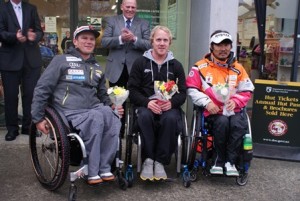