World Cup Win for Christy Prior, Bronze for Tiarn Collins in Snowmass

Watch her run below

The win takes Prior (Kaukapakapa) closer to her goal of selection to the NZ Olympic team for the PyeongChang 2018 Games next month. Collins (Queenstown) has already been named to the team.

The men were first to drop into the course in today's event with Collins earning a solid first run score of 72.12. Landing clean back to back 1260s on the jumps and executing a clean rail section, he then upped his score to 83.57 to finish third and claim his first World Cup medal in the Slopestyle discipline. (Collins won a World Cup silver medal in Snowboard Big Air in November 2017 and will contest both disciplines in PyeongChang.)

"I'm over the moon, this is my first big slopestyle podium. It's definitely a confidence booster heading in the Games," said Collins. "It's cool to get back into the competition space after the holidays, and even better to podium."

USA rider Redmond Gerard claimed the win on 87.28 with Japan's Hiroaki Kunitake in the silver medal spot on 83.64.

It all came down to the last of three runs for Christy Prior, with slight mistakes on her first two attempts leaving her with scores of 56.52 and 22.30 and work to do to edge out Japan's Iwabuchi (68.17) and Australia's Tess Coady (65.16).

With everything to play for the Kiwi rider laid down a clean run top to bottom of the course, looking smooth and confident on the rail section and landing signature rodeo 7 and backside 540s on the jumps for a score of 77.06 and the win.

"I'm feeling quite overwhelmed, it's been such a rollercoaster ride and all quite surreal," said Prior who has battled injury and cancelled competitions on her quest to meet Olympic qualifying criteria.

"I guess I've just had to get used to always dealing with the pressure and maybe that experience helped me today. I'm just so thankful to get this result.

"I have an awesome support crew around me, the New Zealand team are just phenomenal and they really helped when it came down to it."

Iwabuchi finished in second place and Coady in third. 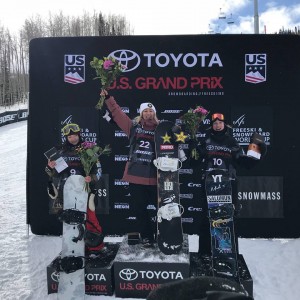