Landgraaf, The Netherlands (21 November 2014) – A World Cup silver medal has signalled that para-snowboarder Carl Murphy (Wanaka) is on his way back to top competitive form. Murphy won his second podium spot overnight (NZ time) at the two-day International Paralympic Committee (IPC) banked slalom event being staged at the indoor Snowworld venue at Landgraaf in The Netherlands. The result comes off the back of a third place finish for Murphy in the previous day’s Europa Cup.

The world class field featured all the sport’s big names including the American trio of Mike Shea, Evan Strong and Keith Gabel that swept the men’s snowboard cross podium at the Paralympic Winter Games in Sochi earlier this year. Disappointed with his fourth place finish in Sochi following an injury marred Paralympic build up Murphy says he is looking for redemption.

“It’s a good feeling to put the disappointment of Sochi and my injuries behind me and I rode the way I know I can,” he commented. “Coming away with silver proves to me that all my hard work is paying off. Also some technical coaching from John Shelly and Rob Fagan from Reign Snowboarding in Austria earlier this month set me up well technically.

“It’s great to be back on the podium two days running. Although it’s not gold it’s still early in the season and I am looking forward to building on this result leading to the World Champs in Spain in February.”

Mike Shea dominated the two day competition winning gold at both the Europa and World Cup races. The World Cup race saw tight racing between the top six competitors with Murphy only beating Evan Strong to the silver medal by 0.1 seconds.

The banked slalom has been added as a new discipline this season following the successful debut of para-snowboard cross in Sochi. Banked slalom is a timed event with each rider given three runs of a slalom course and the combined time of their two fastest runs counting as the final result. The slalom gates are set in either natural banking terrain, or in this case man-made berms, with riders required to make tight radius turns.

Around 40 snowboarders from over 10 countries travelled to Landgraaf to compete in the first IPC races of the 2014-2015 northern hemisphere season. For most, the main focus for the season will be the 2015 IPC Para-Snowboard World Championships in La Molina, Spain, between 23-28 February. 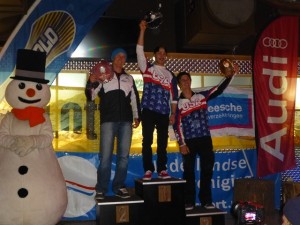