World Cup Podiums for Adam Hall Ahead of World Champs

It’s been a whirlwind week of competition for NZ Paralympian Adam Hall, travelling from the USA to Spain to compete in six ski races in the space of eight days but with six podium results, including World Cup silver and bronze in the bag, Adam says it was all worthwhile.

He then flew to La Molina in Spain to join team mate Corey Peters at the IPC Alpine Skiing World Cup Slalom races. Weather conditions in La Molina had meant that the scheduled giant slalom events had to be cancelled. The change of schedule would suit Adam who specialises in the technical discipline, but would be more of a challenge for sit skier Corey who prefers the speed disciplines and won a silver medal in Giant Slalom at the 2014 Paralympic Winter Games in Sochi.

Adam placed third in Friday’s race behind World champion Alexey Bugaev (RUS) in first and Alexander Alyabyev (RUS) second. On Sunday he pushed through to second place with Bugaev once again topping the podium and Swiss racer Thomas Pfyl in third.

Day one saw Corey Peters put down two clean runs with good technical skiing, managing to put into practice the skills developed in the NZ season. However, he knew with a better line he could improve on his 12th place finish.  The following day Corey set off with a plan of attack and fired up to do a better day two.

He stuck to the plan, made changes to the line and while the extra speed he was carrying caused him to make a few errors, Corey was able to put down two fast runs and finish in eighth place 2.19 seconds behind the leader Takeshi Suzuki (JPN). Taiki Morii (JPN) finished in second place.

“This is by far the best result Corey has ever achieved so far in slalom… the guys that beat him are the best in the world,” says coach Ben Adams.

Skiers are in La Molina as part of the preparations for the 2015 IPC Alpine Skiing World Championships in Panorama, Canada, from 28 February - 10 March, which is set to see 130 of the world's best athletes from 30 countries line-up for the biggest gathering of alpine skiers since Sochi 2014.

Full results are available at www.paralympic.org/alpine-skiing/calendar-and-results. 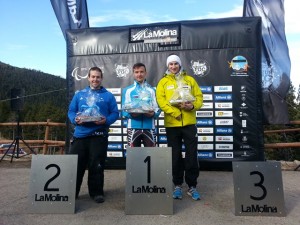