World Cup Gold for Christy Prior

Stoneham, Canada (19 January 2014) - New Zealand snowboarder Christy Prior has won the gold medal at the last Olympic qualifying event ahead of the Sochi Games next month.

Competing in the slopestyle discipline at the International Ski Federation (FIS) World Cup in Stoneham, Canada Christy took a convincing win, scoring 89.75 ahead of Dutch rider Cheryl Maas in second with 85.25 and Austrian Anna Gasser in third with 84.25.

The win marks Christy’s first major result at a FIS World Cup and took place against what Winter Performance Programme Director Ashley Light describes as “a reasonably tough field” despite the absence of the US team.

“This result will give Christy a good confidence boost as she looks to build momentum through to the Olympic Games,” commented Ashley Light.

“This result indicates that Christy is now starting to fulfil her true potential.”

Speaking after the event Christy said that she was “relieved and really thankful,” to have landed her gold medal winning run.

Christy placed second in her qualifying heat earlier in the week allowing her to leap frog the semi-finals competition and progress straight to finals.

“The pressure was intense for qualifiers but I landed a run that was consistent and so went straight through to finals,” she explained.

Team mate Rebecca Torr placed fourth in her qualifying heat allowing her to progress to semi-finals where she placed fifth, missing out on finals. 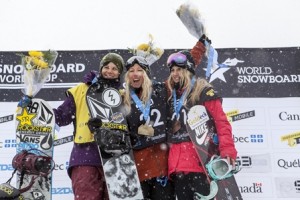