Prior (Kaukapakapa) spent 18 months out of competition due to injury, making her return in August this year for the Audi quattro Winter Games NZ.

“It’s good to be back,” said Prior following today’s event. “I’m happy to step up and get a World Cup done and really stoked with the outcome.”

Watch by a crowd of 16,000, competition took place on a 120-metre long and 49-metre high scaffolding ramp which had been constructed on the hockey field in the German town of Moenchengladbach. Prior first had to make it through the best-of-two-tricks qualifying rounds with a top-six result to book her spot in finals. She ticked the box with a well-executed frontside rodeo 720 melon grab.

Finals followed a three-run format with the combined total of the best two trick scores determining final placings. Prior was able to execute her plan to first repeat her qualifying trick before shooting for a personal best by landing a double wildcat for the first time in competition.

Watch the highlights below

The New Zealand snowboarders will now travel to Copper Mountain resort in Colorado, USA for their next Big Air World Cup from 8-10 December. 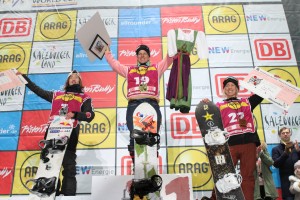 5 years ago
Christy Prior, Big Air