Quebec City, Canada (12 February 2017) – New Zealand snowboarder Zoi Sadowski Synnott is proving herself a force to be reckoned with in her first season on the FIS World Cup Tour, today earning a bronze medal in Big Air in Quebec, Canada. The result comes off the back of her fourth place finish in Snowboard Slopestyle at the World Cup at Mammoth Mountain in the USA last weekend (5 February).

Riders had three runs to put down their best trick on the purpose-built ramp in downtown Quebec City with the combined total of the best two runs counting for the overall ranking. Zoi made a strong start, scoring 78.25 on her first run with a double wildcat trick and 67.25 in her second with a frontside 720 mute. Knowing that she could tidy things up she repeated the frontside 720 on her third run for a score of 72.75.

Austria’s Anna Gasser secured the win, cementing her lead in the big air World Cup ranking and her career's first Crystal Globe. Julia Marino (USA) finished in second place. The big guns had their work cut out for them on their final runs after both sketching their second run tricks leaving the young Kiwi sitting in first position after the second run.

“I was completely ecstatic,” says Zoi. “I’d landed both of my runs so I already had my score on the board and a chance to improve on my third run.”

Cardrona NZ Park & Pipe Team mate Tiarn Collins (17, Queenstown) was also in action today, firstly competing in the qualifying heats for the men’s Snowboard Slopestyle – where he finished 16th to earn his spot in tomorrow’s finals – before lining up against the best in the world for the Snowboard Big Air final. In a personal best result in this discipline he finished in seventh place, landing a backside 1260 melon on his first run and a cab double cork 1260 on his second run and for his first time in competition.

“It was a pretty big day,” says Tiarn. “I’m in shock. It was crazy just to be in that Big Air final, looking at the start list was scary with all the big names. It’s one of the coolest things I’ve ever done and the biggest crowd I’ve competed in front of.” 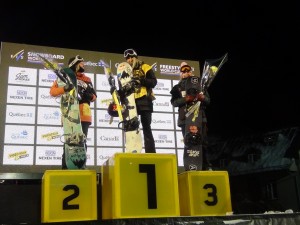