Warm temperatures and therefore challenging course conditions made it hard for the best eight women and 16 men of the Thursday's qualifiers to land their runs.

After qualifying in fifth place in Thursday’s heats Sadowski-Synnott worked hard in the training session to improve her chances of success.  Run one of finals and the softening conditions got the better of the young Kiwi who did not take enough speed into her second jump and sketched on the landing.

The pressure was on in the second run with Sadowski Synnott sitting in seventh position, but, confident in her preparation, she adjusted well and landed a fantastic run, a highlight being landing a double Wildcat for the first time in a slopestyle competition run.

Zoi Sadowski Synnott's run: Switch backside 540 melon, to Frontside 360 tuck knee indy, to Backside 360 mute to Double Wildcat indy; gap to Front 1 indy to Cab 1 mute on the 'whale tail' and a gap 50-50 to frontside 180 out on the container.

Sadowski Synnott was sitting in first place after her second run with her score of 77.50 until Canadian rider Laurie Blouin scored a 78.00 to snatch her career's first gold in what might have been the closest finish of a slopestyle final in the recent years. Dethroned champion Miyabi Onitsuka (JPN, 77,40) placed third.

Snow Sports NZ’s Head Park & Pipe Coach Tom Willmott said “This is Zoi's first World Championship and a podium is an outstanding result for the 16-year old coached by Mitch Brown.  Her hard work and preparation, and nerves of steel certainly paid off.”

“I'm just stoked to put down a run,” says Sadowski Synnott. “I was happy to get into finals, because it was top-8 already. Yeah, I was half a point away from the title but I'm just so happy to be on the podium.”

On to the men’s finals and New Zealand had two more podium contenders in Tiarn Collins and Carlos Garcia-Knight who had qualified in third and first place respectively.

Tiarn put down a good first run, stepping up from his qualifying performance by adding a 50-50 to backside rodeo indy on the battleship fifth feature, but a hand down on his backside 1260 meant the score did not meet his potential.

A flawless backside 1260 on run two, but a slight bobble on his frontside 1080 landing along with the rest of the field really upping the ante meant that Tiarn had to settle for an eighth place finish.

Carlos Garcia-Knight put down the same run as qualifying first up and achieved a reasonable score to put him in sixth position.  A brief catch up between runs with King Felipe VI of Spain who was there to watch the action and Carlos was motivated to gun for the top spot.

He had landed a step-up move – the front double crippler 900 in training and was raring to go in run two with a more difficult trick on the last rail feature also planned.  However, the soft conditions got the better of him and Carlos misjudged speed into the first jump and sketched the landing.

“A seventh place finish was not quite what Carlos had been aiming for,” says Head Coach Tom Willmott. “However both Carlos and Tiarn achieving top-8 results at the pinnacle event with less than personal best runs is a good indication of their future potential and bolsters their strong results during an impressive first Olympic qualifying season for both of them.”

The NZ Snowboard team has a couple of days to rest up before competing in Big Air next week and will be joined by their Freeski team-mates for week two of World Champs.

Full results of the slopestyle event of the Sierra Nevada 2017 world champs can be viewed online: 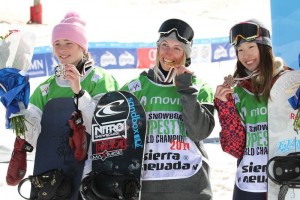