His best result at the end of a long and demanding season, Prebble says there’s definitely “satisfaction in knowing that when it all comes together, anything is possible.”

After finishing fifth at the World Cup in Arosa, Switzerland in December last year and12th in Canada two weeks ago the Kiwi had been working hard on both the technical and tactical sides of racing and had his sights set on a top-12 finish.

With qualifying rounds and finals held all on the same day, rather than the normal two-day format, making it to the finals rounds was always going to be an endurance test. With skiers pushing themselves  to their limits,  the surprises came early and often through the course of the day.

In the very first heat, three-peat crystal globe winner, 2013 world champion, and top qualifier Jean Frederic Chapuis (FRA) was bounced from competition after casing a landing in the middle section of the course and falling behind. Season third-overall on the World Cup Alex Fiva quickly followed suit on his way out of the competition, while top names like Chris Delbosco (CAN), Marc Bischofberger (SUI), and Jonas Devouassoux (FRA) all found themselves done for the day after the 1/4 finals.

Prebble made a solid start and was happy to finish 13th in qualifying heats. With just a short couple of hours to manage recovery it was on to the final rounds. The Kiwi came through in second place in the first rounds (1/8 final), enough to take him to the quarter final. Here, he had his work well and truly cut out, moving from second place to fourth before making a big pass at the bottom of the course to move back into second and on to the semi-final rounds.

Now with the bit really between his teeth the flying Kiwi charged out in front right out of the gate and held off his challengers right to the end to win the semi-final and earn his spot in the final.

First equal out of the start gate, Prebble found himself tangled with Slovenian racer Filip Flisar, managed to escape but was passed by Sweden’s Victor Oehling Norberg. It was tight battle with Prebble holding on to Oehling Norberg’s tails to take silver. 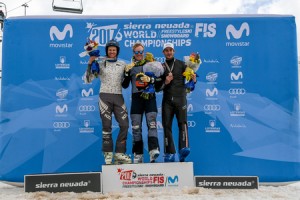