La Molina, Spain- (27 February 2013) – The New Zealand team has finished on a high at the 2013 International Paralympic Committee Alpine Skiing World Championships in La Molina, Spain. Adaptive skiers Adam Hall (Dunedin) and Corey Peters (New Plymouth) were amongst the field of 120 skiers from 28 countries competing in the event which is the last major international Championships ahead of the Sochi 2014 Paralympic Winter Games.

After a tough start to the week, with heavy snowfalls and brutally cold winds delaying and cancelling races, the New Zealand contingent has come away from La Molina with a respectable bronze for Adam Hall in the men’s slalom standing class and a sterling 10th place finish in men’s GS sitting class in his first World Champs from new-comer Corey Peters.

The men’s standing slalom event was a real battle to the end, with many skiers struggling with the conditions. Of the 28 competitors who started the first run, eight competitors failed to finish whilst three were disqualified. Going into the second and final run, just 0.10 seconds separated France’s defending world champion Vincent Gauthier Manuel in first and New Zealand’s Adam Hall in third place.

“Adam Hall skied well if not a little conservatively during these World Champs,” reports Snow Sports NZ’s Jon Turnbull who will be the New Zealand Chef de Mission at the Sochi Paralympic Games in 2014.  “With Sochi set firmly in his mind Adam came here to get business done,” says Turnbull. “He did what was needed to reach the podium and, more importantly, identify what is needed to take things to the next level in Sochi.”

“It was great to be back on the podium this week,” comments Hall. “This is only my second World Champs podium so it is very special to me. I’m really looking forward to getting to Sochi next week for World Cup Finals and racing on the venue for the 2014 Paralympics.”

Corey Peters is proving himself as an emerging talent in the sit-ski category. “Corey made his coaches and support team proud this week, not just by his outstanding result in GS today, but by his performance and tactical presence on the hill,” says Turnbull. “He and coach, Scott Olson, had a solid plan through inspection and Corey stuck to the plan – getting through the tough sections, which were tossing good racers out of the course left right and centre, and attacking the flats like a veteran skier.”

The 2013 IPC Alpine Skiing World Championships event is the first of four major stepping stones for the New Zealand team as they look towards the Sochi 2014 Paralympic Games.

“It has been an invaluable experience for us all and despite some challenges we came away with superb results,” says Turnbull.

Coach Scott Olson, who has been working with Adam Hall since the Vancouver Games where Hall won a gold medal, and with Corey only since the last New Zealand season  says, “Corey was able to hit his mark and put a good gauge upon the talent on the world stage while the third place finish from Adam Hall demonstrates he is still a force to be reckoned with.”

“I was stoked to get a top 10 finish this week,” enthuses Corey Peters. “This was obviously my first World Champs and to get such a great result on such a steep hill was awesome. I’m excited about building on this experience over the next year, and I’d love to have the opportunity to put what I have learned this week in to practice in Sochi in 2014 if I qualify.”

Next on the agenda for the New Zealand team is the Paralympic test event in Sochi, Russia next week.

“For us the test event next week in Russia is paramount for our planning towards the main event in a year’s time,” says Turnbull. “While the competition is an important World Cup event, the experience of getting to and competing in Russia is our main focus. The terrain is exceptionally steep and the culture so very foreign. We are all excited to get there and put our mark on Russian soil.” 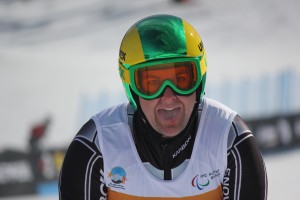