The World Para Snow Sports Championships have finished on a high for the New Zealand team, with Adam Hall claiming the silver medal in Slalom on the final day of racing.

“To finish on the podium is absolutely amazing, it has been a long week and to finish with result like this in slalom is something we knew we could always achieve and is a great benchmark heading into Beijing 2022.”

Adam was sitting in third position after run one, but the tight race meant he knew he would have to go all out for run two. He delivered a blistering run, resulting in gaining more than one second of time advantage.

Adam explained “It was definitely pretty tight after the first run, I made some changes going into today and attacked from the get-go, with technical events you have to put the pressure on.”

The last major event Adam competed in was in December 2018, over three years ago. "With the amount of time between major competitions and to still be in the mix in incredible."

Arthur Bauchet (FRA) took the win today, maintaining a convincing lead right from the start. Alexander Alyabyev of the Russian Paralympic Committee rounded out the podium in the bronze medal position.

The Paralympic New Zealand team members Adam Hall, Corey Peters and Aaron Ewen will next be in action at the World Cup in Åre, Sweden next week where Adam looks to continue the momentum from today. 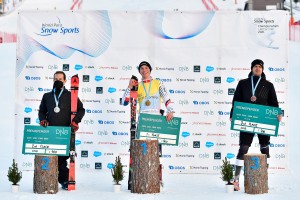