The World Champs are the biggest gathering of para-alpine skiers since the Sochi 2014 Paralympic Winter Games, featuring over 100 athletes from 23 countries.

While downhill is a new discipline for Peters, he had signalled his medal winning potential earlier in the week by posting some of the fastest training runs amongst a strong field which included Paralympic champion and world number one Akira Kano (JPN). Today, Peters took things up a gear and posted an even quicker time, racing home for gold in 1:28.06. Austria’s Roman Rabl finished second in 1:28.80 and Japan’s Taikii Morii  third 1:29.26.

“The training days had given me confidence, knowing that, apart from a few more nerves, I just had to copy and repeat on race day,” says Peters. “I knew the podium was within my reach but I didn’t know if the other racers had any more left in the tank and would come out faster today.

“Compared to other downhill courses, Panorama is quite technical and that really suited my style.

“I’m just really stoked to win today, it all feels quite unbelievable.”

New Zealand’s Adam Hall had a less successful day posting a DNF in the men’s standing event. His run started out well with the Kiwi – also an infrequent downhill competitor – skiing fast and aggressively and showing good form on the big sweeping turns. Things went awry on the second to last gate when Hall took too straight a line, hooked his outrigger in the base of the gate and came down hard, sliding out of the course.

Russia’s Alexey Bugaev, who has been on winning form all season, claimed the gold medal for the men’s standing downhill in a time of 1:27.60 with Austria’s Matthias Lanzinger second in 1:29.71 and Russia’s Alexander Vetrov third in 1:31.25.

Racing continues in Panorama tomorrow with the Super-G. A livestream will be available at www.Panorama2015.com alongside live results. Full schedule available here 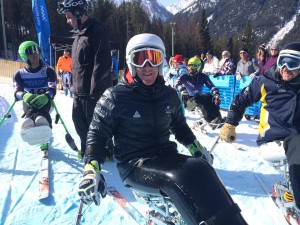