Winter arrived right on cue to celebrate the Winter to Winter Under 18 snow sports athletes' success stories at the Lake Wanaka Centre on the night of Sunday 22 May. The evening was organised and run by Wanaka Ski & Snowsports Club.

The 2015/16 Northern Hemisphere season has been the most rewarding season to date for international youth titles, podiums and results for New Zealand snow sports. Even stormy weather and the Crown Range closure couldn't stop families and friends from crossing the hill to share their amazing stories with their Wanaka friends and competitors.

The night began with a red carpet walk to the stage by 24 athletes who had travelled to the Northern Hemisphere to compete. Mount Aspiring College students Samantha Haines and Albie Haynes performed moving renditions of the National Anthem in Maori and English as the athletes stood on the red carpet with their medals and trophies.

Following welcomes by Marty Toomey Snow Sports NZ CEO and Lyal Cocks, QLDC Deputy Mayor, a relaxed format of couch chat interviews allowed 16 young athletes to share their moments of glory, their highs and lows, and some inside stories as their footage was shown on the big screen.

Facilitators Bonny and Jesse Teat and Tom Willmott helped the younger athletes relax into the warm receptive atmosphere of the appreciative audience. Local double Youth Olympic Games freeski medalist and USASA Open winner Finn Bilous and Arrowtown snowboarder Tiarn Collins, who took fourth and fifth place at the Games, spoke about their experieces art the Games in Norway and at USASA events. Wanaka’s Ben Richards, who travelled around Europe in search of FIS Children's Alpine race titles, spoke about his medal winning performances and how he battled through injury to put together exceptional performances at the Whistler Cup in Canada.

Craig Murray shared stories of his amazing journey to take out the Junior World Freeride Tour title. Each of these featured athletes had exceptional visual footage which hadn't previously been viewed by the local community.

Medalists Kate Richards, Alice Robinson  Andie Gillings and Ben Ellis (the latter three from Queenstown) chatted about their very successful season of alpine ski racing. Alice, who is a very promising alpine racer, won the USSA under 16 title and unbelievably, she has another year in that age group. Freeskier Ben Harrington talked about being invited to forerun on the 2018 Olympic Slopestyle course in Korea and Manu Barnard explained ski travel and successful competion in the USA. Finn Duffy, Queenstown, shared his joyous moments on the Junior World Freeride Snowboard Tour and local boy Alistair Garland explained his ski runs which took him to overall 9th place on the JWFT.

Wanaka Ski and Snowsports club organised the event which included the presentation of their annual Grassroots Awards to thirty nine primary school aged children. The $8200 of 2016 grants will enable more snowsports tuition for local families on the mountains. Thomas Benson spoke about the three years he has received a Grassroots grant and what he's loved about it.

“Making new friends, the club's family fun events, competing in more series local regional events and seeing and hearing about all the club's older athletes' adventures overseas on nights like this”.

He loves the Wanaka Ski and Snowsports clubs motto “Where you find the competitive and the adventurous” and thanked the club for encouraging and supporting the Grassroots kids so they can be adventurous and competitive.

The locally sponsored auction of ‘winter essentials’ raised $3570 which will be used to assist more of Wanaka Ski and Snowsports club's young families. 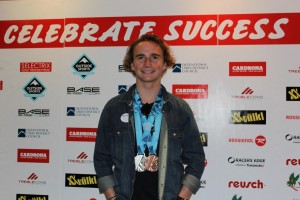