Winter Games NZ to be Held as Annual Event

The Audi quattro Winter Games NZ has entered an exciting new era with Marty Toomey stepping in to the role of Chief Executive Officer this week, along with confirmation that the Games will now take place on an annual basis.

“Those factors gave the Board and NZ Major Events confidence to turn the Winter Games into an annual event and I look forward to working with the staff, sponsors, ski areas and ice venues, volunteers and media to make 2018 an equally, if not more, successful edition of the Audi quattro Winter Games NZ.”

The New Zealand Government has committed, through its NZ Major Events, to supporting the Games through to 2021, meaning that they will continue to be an important component of the high performance development programme for New Zealand athletes.

Members of the NZ Olympic team, including Olympic medallists Zoi Sadowski-Synnott and Nico Porteous, and top performers Carlos Garcia Knight and Beau-James Wells, used the 2017 Winter Games NZ to help them prepare for the Winter Olympics.

“The outstanding results of Zoi and Nico and the other quality performances of the NZ team in PyeongChang is a wonderful endorsement of our Winter Games,” said Winter Games NZ Chair Sir Eion Edgar.

“At the Pyeongchang Olympic Winter Games, 25 out of the 30 medallists in the Park and Pipe freeski and snowboard events, and a gold medallist in cross country skiing, competed at the Audi quattro Winter Games NZ held in Central Otago just six months ago. This just emphasises that the Games really is one of the most internationally significant events that New Zealand hosts,” says Arthur Klap, who recently resigned after 11 years as the Chief Executive of the Winter Games NZ.

The 2018 Audi quattro Winter Games NZ will take place from 24 August to 8 September. The full competition schedule is available at this link. 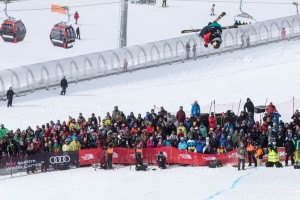