“Audi quattro Winter Games NZ is excited to be the first event to host a FIS Freeski Big Air World Cup following its inclusion on the Olympic Winter Games programme,” says CEO Marty Toomey. “Freeski Big Air is an exciting event and will appeal equally to athletes and spectators. This IOC announcement will also ensure that the field for our event in August should be of really high quality.”

Big Air competitors typically also compete in the Slopestyle discipline, but Halfpipe specialists are equally able to crossover. The addition of Freeski Big Air to the Olympic programme is regarded as an exciting opportunity to up the medal count.

“The inclusion of Freeski Big Air into the Olympic event roster is exciting for the sport and in particular for NZ athletes,” says Snow Sports NZ Performance Director Ashley Light.

“New Zealand already has a strong performance record in the discipline at X Games and World Cups and with a number of proven and upcoming athletes now able to target another discipline at the Olympics the future is bright.

“Correlating with the talent of the athletes, the home advantage of world-class Big Air training facilities at Cardrona with the recently installed landing bag and the World Cup standard competition jump, the NZ Freeski athletes have every opportunity to progress and reach their goals.”

The 70m long, 25m wide inflatable landing bag, recently installed at the NZ Park and Pipe team’s home base at Cardrona Alpine Resort, is providing the perfect training environment with five weeks to go until the Winter Games NZ gets underway on 24 August.

“We’re getting some solid training on the landing bag at Cardrona at the moment and feeling pretty lucky to have the opportunity to be learning new tricks on a world-class facility, not everyone has that chance,” says NZ Olympian and Youth Olympic Games medallist Finn Bilous.

News that Freeski Big Air has been added to the Beijing 2022 programme has been welcomed by the sport’s top athletes.

“I’m thrilled to hear the news!” says Jossi Wells. “It’s great progress for the sport of freeskiing and we are in a good position here in NZ with major Big Air events in our backyard like the Winter Games NZ and the Jossi Wells Invitational.”

Finn Bilous adds, “Seeing the snowboarders in PyeongChang have two opportunities to perform really made me want to be a part of it. Freeski Big Air is a new challenge that I’m looking forward to. Winter Games next month will be a good chance to gain experience in this discipline, to perform the tricks I’ve currently got in the bag and see what other competitors are doing before we head in to the northern hemisphere season and start a busy competition schedule.”

The seven new competitions included for the Olympic Winter Games Beijing 2022 are:

Freeski Big Air is the only one of these featured on the 2018 Audi quattro Winter Games NZ schedule. 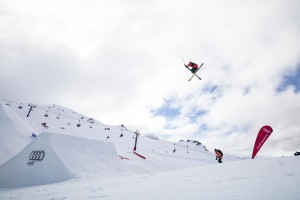