Piera Hudson (Hawke’s Bay/ Wanaka), who yesterday claimed the national GS title, was the first racer out of the gates but her day would quickly take a turn for the worse. Piera crashed on the bottom half of her first run putting her out of contention for another top result today.

Eliza Grigg (Canterbury) was the next of the Kiwis to take the course and posted a time of 50.28s putting her in 15th place in the field of 25 racers, behind the leader Sabina Majerczyk (Pol) in 46.96s. By the end of run one Elizabeth Reid (Invercargill) was sitting 18th 3.51s behind the leader and Melissa Jones in 21st place 7.21s off the lead.

National GS champion Willis Feasey (Twizel) was once again the fastest New Zealander in the men’s field. His time of 47.67s put him into 12th place overall and 1.38s off the leader Jared Goldberg (USA) who claimed first place in yesterday’s national championship race.

“I’d like to be in the top five today,” explained Willis after his first run. “I’m just going to hammer down the second run. It’s still do-able.”

Adam Barwood (Queenstown) posted a time of 48.05s placing him 16th of 69 racers after run one, while Nick Prebble’s (Christchurch) time of 48.12s left him in 18th place and a little frustrated with his first run performance.

“I need to bring it through from training to racing, I’m just not doing it right now,” commented Nick. “I’m going to go for it a bit more in the second run.”

National Alpine Development Team member Tai Juneau (Oakura) was happy enough with his first run time of 48.41s but planned to “take more of a risk on the second run” to improve his ranking from 23rd place.

The second run got underway after a course re-set and with the day starting to warm up. Poland’s Sabina Majerczyk held on to her first run lead, topping the score board with her overall time of 1:36.67s. Norwegian racers claimed second and third with Chloe Fausa 0.21s back in 1:36.88s followed by Kristin Lysdahl in 1:37.52s.

Eliza Grigg was the fastest of the NZ women, finishing ninth overall with a time of 1:42.07s while Elizabeth Reid finished 13th overall in 1:43.05s.

Looking to step things up a gear, Willis Feasey felt that his second run was an improvement on the first but that he still had “plenty to work on”. His time of 1:37.17s kept him in 12th place on final results a way off his goal of a top five finish. Adam Barwood also maintained his first run ranking, finishing in 16th place with a time of 1:38.05s while Nick Prebble dropped one place to 19th overall with his time of 1:38.54s. 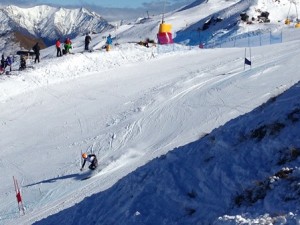