Willis Feasey, Adam Hall and Corey Peters Claim Back to Back National Titles.

Willis Feasey, yesterday’s Super G Champion, convincingly won the Giant Slalom today 1.07 seconds ahead of his closest competitor. “I hadn’t had the best training build up but did enough on the day to get it, so really happy”. Jack Adams finished in second place and Harrison Messenger in third, rounding out the men’s podium.

Adam Hall and Corey Peters both carried their momentum from yesterday, with Adam crowned the standing National Para Giant Slalom winner, with Josh Crean finishing in second. Corey won the sitting National Para Giant Slalom race, explaining that due to the weather overnight “today was very interesting, the course preparation was kind of late, a late start and obviously a late finish. Snow conditions were pretty variable but the coaches and all the course workers did a good job to get the race off. I am pretty happy to come away with another win”. High Performance Development athlete Aaron Ewen finished in second place.

Piera Hudson took out the Women’s National Giant Slalom Champion, winning by an impressive 2.29 seconds. Piera explained “I think we’re all just really happy to get a race off today, I don’t think any of us were expecting much when we were in lockdown of getting any kind of season so it’s great that we could have our Nationals today”. She was joined on the Women’s podium by Eliza Grigg, yesterday’s Super G champion, in second and Michol Hinton in third. 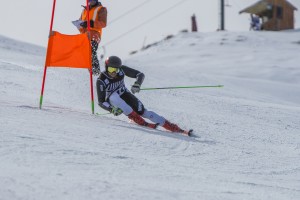